‘Cinespia’: Screenings at a cemetery 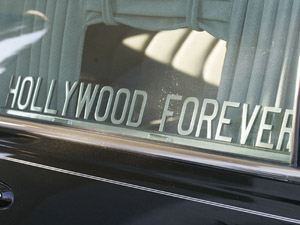 Looking to add more pizzazz to your Saturday evenings? Cinespia is the way to go! For those not familiar, Cinespia is a Los Angeles-based organization that screens films on the Fairbanks Lawn of the Hollywood Forever Cemetery. Though watching a movie amongst the dead may sound dreary, it’s actually an exciting affordable event for friends and family to partake in.

The organization was established back in 2002, and has successfully been selling out screenings since then. Cinespia does show films in other locations throughout the rest of the year, but during the summer the screenings mainly take place at the cemetery. The Fairbanks Lawn provides a space large enough to accommodate several hundred people who view the film projected on a large wall adjacent to the lawn. Several speakers align the lawn space making it easy for everyone to hear and enjoy the film.

Tickets for Cinespia events range anywhere between $12-15. The events mostly take place on Saturday evenings, with the exception of Sundays on long weekends. This past weekend was one of those exceptions. With Labor Day on Monday, Cinespia screened two cult classics. Saturday’s viewers were treated to Dustin Hoffman in “The Graduate,” while Sunday brought in a sold out crowd for “The Breakfast Club.” Previous viewings include “Clueless,” “Back to the Future,” “Scream,” and “Roman Holiday.’

Cinespia events have no minimum age requirement. Anyone can attend Cinespia, which usually draws particular crowds based on the type of film being shown. The most advantageous part of Cinespia is the freedom to bring whatever you like to help you enjoy your movie experience. Attendees bring blankets, chairs (which have a maximum height requirement), beverages and food of all kinds. Outside restrooms are also provided for the public. Another Cinespia attraction is the recent addition of free photo booths that fit the film’s theme on the night of an event.

While Cinespia is always a good time, the parking situation could possibly put a damper on the evening. The organization does sell parking passes for on site parking which cost about $15 for the convenience of those attending. However, early arrival is recommended for street parking if one does not wish to pay.

It’s sad to say that the Cinespia cemetery screenings are quickly coming to an end with summer on it’s deathbed, but there are a few screenings left. In the next few weeks Cinespia will be showing “All About Eve,” “Aliens,” “Boogie Nights,” and the final episode of AMC’s “Breaking Bad,” which the cast and crew will attend. It’s definitely an experience to be had before the summer is over, but it is also something to look forward to in the future. For more information on Cinespia, or where to grab tickets and parking passes, visit http://cinespia.org/.