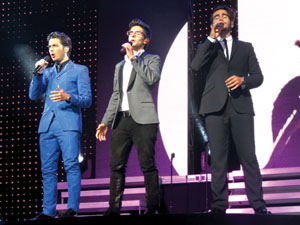 At 9 o’clock sharp, the lights began to dim. An orchestra composed of men and women, all dressed in white, started to play the opening of “Questo Amore,” Il Volo’s rendition of Aerosmith’s “I Don’t Wanna Miss A Thing.”

Three backdrops appeared at the top of the stage, and a dim blue light lit one up just as Gianluca Ginoble, the 18-year-old baritone of the group, began to belt out the lyrics. His silhouetted figure shone through the screen as if he were behind it. Ignazio Boschetto, 18, one of the two tenors, subsequently began to sing his part, his shadow also appearing on the middle backdrop, followed by 20-year-old Piero Barone, the other tenor of the group, who unleashed a powerful voice comparable to a tenor with 30 years of experience.

Just as their three shadows continued to give the illusion of them singing, the three young men approached the stage from the sides, startling the excited audience as their silhouettes began to fade. The crowd was in awe. The boys had their full attention. With excitement in their eyes and smiles throughout, Il Volo thanked their fans, and continued the show.

Next up was, “Un Amore Cosi Grande,” “Tous Les Visages De L’Amour” and their incredible nationwide hit “We Are Love.” They each had a chance to showcase their individual talents with solo performances. Piero, being the first, performed his piece, “No Puede Ser.”

Gianluca and Ignazio returned to the stage, continuing the show with one more song before Ignazio took the stage to perform his solo, “Caruso.” Known to fans as the funny and adorable one of the group, his sweet voice filled the scene with nothing but silence, followed by applause from the audience. The solos perfectly showcased the group’s individual talent.

Other songs included their cover of U2’s “Beautiful Day,” Jose Jose’s “El Triste,” and “Granada,” a famous 1932 Latin song that is still very popular to this day. After an intense and powerful performance, Gianluca took the stage for his performance of “Night and Day.”

The show continued, with the cover of Sarah McLachlan’s “Angel,” bringing many to tears. Then “Smile” by Charlie Chaplin and then West Side Story’s “Maria,” where they each brought one lucky lady to the stage and serenaded them.

A song many were eager to hear came later in the night, when Gianluca began belting out lyrics to Elvis Presley’s “Surrender,” followed by Ignazio and Piero’s parts, respectively. The crowd was going wild, and I mean wild. Had someone just walked in during this song, chances are they would have thought Andrea Bocelli himself was in the house.

The concert came to a close with fans (young and old) running up to the stage, reaching their arms up to touch the boys. The group ran to both ends of the stage, greeting their beloved admirers and capping it off with a big “Thank you, Los Angeles!”

To say that Il Volo has talent is an understatement. I have personally flown across the country – five planes and two near-death experiences – just to see them take the stage. It is rare to encounter such deep, beautiful souls. I can recall seeing them perform “O Sole Mio” on YouTube over a year ago, and being immediately taken with their unique style. Seeing them transform from young teens to Italian superstars taking over the United States and Latin America, makes me more than happy. It makes me proud. I encourage everyone to give them a chance. It’s not just music to your ears, it’s music for your soul.