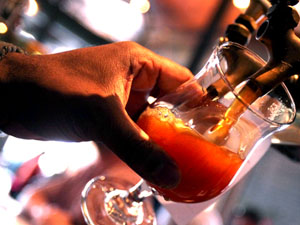 Living in Los Angeles, it’s hard not to pass by the Anheuser-Busch brewery. It’s the defining landmark of the end of the northbound 405 freeway. If it was still the publicly accessible family attraction it was in the 80s, it would be hard to imagine the weekend-warrior beer enthusiasts sitting in its taproom enjoying a generic American-style lager. If Budweiser is sought, the corner store or a Dodger game may have what you’re looking for.

For those seeking quality, the hunt for craft beer in Los Angeles usually ends with a trip to BevMo, where the closest “local” options are those spawning from the San Diego area. San Diego’s major players like Stone and Karl Strauss can be found bottled up on shelves and pouring out of taps just about anywhere in California.

Locally crafted beer just isn’t something Los Angeles is known for. As far as most are concerned, L.A. doesn’t even brew aside from the BJ’s, Oggi’s and Karl Strauss’. Each of them were conceived well out of the county line, opening new locations in the fashion of chain restaurants.

That logic isn’t entirely wrong, at least it wasn’t just a few years back. Just off the Glendale Freeway near San Fernando Road, Eagle Rock Brewing Company was established in 2009, making it one of L.A.’s first local breweries in over 60 years.

Their website lays it out plain and simple: “Our mission to produce small batches of artisanal beers, using quality ingredients and upholding them to the highest standards, has helped in the development of L.A.’s community of beer drinkers.” That they did.

Two years later and a couple miles north, Golden Road Brewing was founded by a restaurant man, Tony Yanow, and craft beer veteran, Meg Gill, who had similar palates and a vision for bringing quality craft beer to a city that had no excuse not to. Within just two short years, they’ve become a mainstay in the would-be beer scene of Los Angeles, having their own brewery, canning facility and pub on San Fernando Road just off the 134.

In February of this year, a third brewery opened its doors in the heart of the downtown Arts District, Angel City Brewery. They say what’s happening is a “brewing renaissance,” and they’re glad as hell to be a part of it. Angel City is taking a rotating selection of small-batch microbrew and like many of the smaller breweries in the San Diego market, have it only available in their tasting room and the local restaurants.

The dark age of brew lasted over 60 years in Los Angeles. It was a dry county as far as beer connoisseurs and risk takers were concerned, and still might be. Three measly breweries in a city with a population over-doubling that of San Diego, isn’t anything to brag about.

If a fresh, quality craft beer is what you’re after, it might be a safer bet to head down to S.D. for the weekend. Though, it’s not the only destination for a craft brew anymore. They may be few and far between, but Los Angeles finally has worthy craft beer.

Food: Various food trucks, or bring your own

Food: No, but restaurants nearby