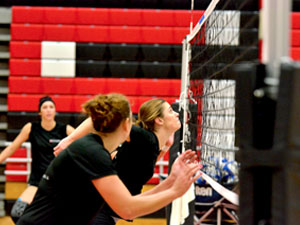 Standing six feet and two inches tall, she never felt shorter in her life. For the first time, 47 of the best collegiate volleyball players towered over her on the court.

Most people would let that intimidate them. But not her. She was inspired.

In May 2013, CSUN junior middle blocker Casey Hinger was named in the U.S. Women’s Volleyball National Senior roster. The program roster consists of athletes representing 29 different universities, according to GoMatadors.com.

“It showed me how much I had to grow as a player,” Hinger said. “It felt amazing. It was such a humbling experience and an honor to play with the top volleyball players from all over.”

At first, Hinger received news that she was being considered as an alternate. But soon after, she got confirmation while waiting with her grandparents, and began to cry. She was officially on the roster.

As a freshman in high school, Hinger was encouraged by her extremely athletic parents to try out for a sport. So she went for volleyball and fell in love with it. A former soccer goalie, Hinger always felt the sport lacked team spirit. Volleyball was exactly what she was missing.

“Soccer is technically a team sport, but I always felt isolated,” Hinger said. “I was on my own and had only myself to depend on throughout a game. But volleyball is so team-oriented. Every team member relies on the next.”

That’s why she chose volleyball over any other sport.

Hinger said her teammates are everything when it comes to winning games. According to her, she would not be able to make a good hit or a good pass without the team being in sync. But her teammates’ support does not end on the court.

When she was leaving for training camp in Dallas, they made her a card covered in inspirational notes and called her everyday to see how her training was going.

Starting June 25, Hinger and the rest of the 48 players headed to Dallas to begin their six-day training period. And it was exhausting, Hinger said.

Training consisted of hours of practicing hits, passes, jumps and working out at the gym to get in shape for the big game.

“The biggest challenge, however, was overcoming the fact that I wasn’t the biggest hitter anymore. I was small for middle blocker,” Hinger said. “So I had to stick to my strengths: quickness and thinking fast on my feet. I realized the potential that I have. It was also encouraging to see all these players we are always talking about back at home in the same position as me.”

But Hinger was not always as skilled as she is now. Hinger remembers when she first started playing volleyball and the determination it took to get to where she is now.

Her advice to athletes of all ages?

“Don’t coast,” Hinger said. “Everyone thinks they’re the big player at one point and they start forgetting they still need to work hard. So they start getting comfortable and coasting. Instead, continue working hard and giving 110 percent because if you don’t, there’s always someone else who’s working harder to surpass you.”

She also advises her peers not to be such perfectionists and dwell on the mistakes they make. Instead, learn to appreciate the little achievements because they count just as much.

Jeff Stork, CSUN’s head coach for women’s volleyball, describes Hinger as a good representative for the team and as truly well-rounded  and a team player.  Not only is she a great middle blocker, she also has the ability to be an outside player as well, said Stork.

“Her quickness and variety of sets make her a truly dynamic and explosive player,” Stork said. “We are expanding her role as a passer and a server now. The environment we put her in allows her to grow, but she really has an aptitude for this sport.”

Her personality also contributes to her overall success. Hinger is a strong leader and remains accountable for her actions, Stork said.

“She sets high standards for the team and is quick to support a team member who is doing a good job or confront one who is falling behind,” he said.

Off the court, Hinger double majors in psychology and child development. She plans to work with children, ultimately becoming a clinical psychologist and family counselor after earning her master’s degree. As of now, she coaches 12-year-old children in volleyball in her spare time.

Some may ask what is next for a young player who has already come so far. Hinger has no plans of stopping now. She said she does not want to be the girl who peaks in her sophomore year. Her next goal is winning the NCAA tournament with her team.