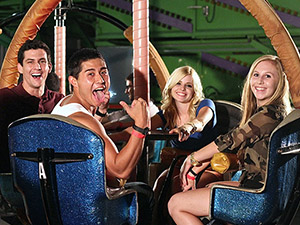 Students flashed back to the past as they celebrated the 1950s themed Matador Nights at the University Student Union (USU) on Friday.

Matador Nights has become one of the most anticipated free events of each semester. It is because of this that tickets to the festival sold out before the event began and roughly 5,400 students filled the USU to capacity.

The event gave students the opportunity to escape reality and to enjoy a different era for the night. Students enjoyed free games, rides and drinks.

Students were greeted by the beats of DJ Nick, the hip-hop music drawing them to the dance floor.

Special guest DJ Eric D-Lux, from the popular radio station Power 106, set the stage for music that night. Students accumulated in the center of the USU dancing and twerking. It wasn’t until first-time CSUN guest Kid Ink appeared that the crowds went wild.

“Kid Ink was my favorite part,” said Opeoluwa Gunre, 24 -year-old English graduate student. “It was a free event, and this night lived up to my expectations. I will come back again in the spring.”

Kid Ink performed his new single, “Show Me,” which he just released a few days ago featuring Chris Brown. He also featured a couple of other songs before leaving for the night.

A minor incident occurred at 12:24 a.m. when a fight between three male students erupted on the dance floor.

Security quickly jumped into action and escorted the three students to the exit, forcing them to leave. The crowds surrounding the scene soon dissipated, and many students decided it was time to end their night after the disturbance.

However, before the fight occurred, Matador Nights ran smooth while students participated in the different activities offered.

For 20-year-old CTVA major Jonathan Rincon, his first tactic was heading straight for the mini arcade located in the Plaza Del Sol.

“I saw [the arcade] through the window and I was like ‘Donkey Kong!” Rincon said.

The Plaza Del Sol was decorated as a 1950’s diner. There were high top tables, classic-styled booths and a soda fountain bar area where students could grab free root beer floats.

Making their way through the Plaza Del Sol, students were able to test out their skating skills on the makeshift skating rink. Rental roller skates were provided.

Inside the Northridge Center the craft corner supplied white bandannas that students could decorate to go with their 1950’s attire.

The carnival took place just outside the Plaza Del Sol area. Students played games and took turns riding “The Tornado”, a brightly lit four person ride that spins in circular motion, and the long slide. Winners of the game booths were entered into a raffle to win a variety of gift cards. Two of the gift cards included money to the Matador Bookstore and Jamba Juice.

“The best part of the night was going on the slide with a couple of girls,” said 22-year-old business major Cal Lanuza.

“It’s a great turnout. People keep signing up [to sing] all the time,” said Ashley Du, 21, in charge of the karaoke booth. “It’s a really good vibe and lot of people are laughing and having fun.”