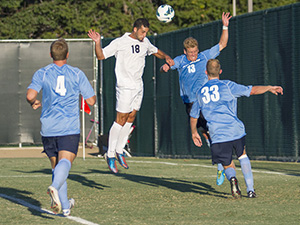 Following a bitter defeat at the hands of the Toreros in the NCAA Tournament last year, the Matadors got retribution thanks to a quick-strike offense that found the back of the net in the sixth minute of play.

“It’s the best feeling in the world, they beat us last year and now we beat them,” said junior forward Sagi Lev-Ari. “The scouting report was perfect, so we have to thank the coaches.”

Lev-Ari picked up right where he left off scoring the game’s first goal on Northridge’s first shot and bringing his total to four goals on the year.

Freshman midfielder Juan Samayoa started the play by stripping a Toreros defender and sending a through ball to senior forward Beto Velasquez near midfield. Velasquez then crossed the ball to a streaking Lev-Ari who chipped it home past Toreros’ goalkeeper Michael D’arrigo.

“We work very well together, we played hard and the coaches really helped us understand the game plan,” said Lev-Ari.

Despite the early goal, ball possession remained relatively even with both teams trading four shots in the half.

It wasn’t until the 42nd minute that CSUN broke away thanks to a thundering shot by senior forward Brian Behrad that beat D’arrigo on the right side.

San Diego’s best chance came shortly after on a shot by Torrey Dearmas that rang off the right post.

The Toreros started the second half aggressively, controlling the tempo with crisp one-touch passes and keeping the Matadors defense on their heels.

After Northridge cleared the ball, San Diego midfielder Connor Brandt sent a precision pass to midfielder Darragh Vieyra, who blasted the ball in the lower left corner past a maze of players crowding the net.

“We lost a little bit of our technique, and we lost too many balls in the middle to open up this game,” said head coach Terry Davila.

Northridge nearly put the game away in the 60th minute but D’arrigo stepped up with two excellent saves in rapid succession.

First he stopped Lev-Ari’s header that was destined for the back of the net and then he robbed freshman midfielder Steven Manios on the doorstep.

The Toreros fed off their goalkeeper, putting more pressure on Northridge.

Clinging to a one-goal lead, the Matadors defense finally buckled down. Sophomore goalkeeper Adam Hobbs was tested late twice in the game, making two critical saves to preserve the lead.

“The backline was communicating a lot, we fell asleep in the middle but we really stepped it up at the end.” said Hobbs. “We realized how hard San Diego came out in the second half, and we really had to step up and win the big balls. I’m really proud to be part of this team.”

The Matadors undefeated streak will be put to the test this Sunday when they face St Mary’s.

“I’m not worried about the past anymore, I’m going to move on to the future, we’ve got St Mary’s on Sunday and I think its going to be the hardest game of the year,” Davila said.