Students required to “walk their wheels” within dismount zones 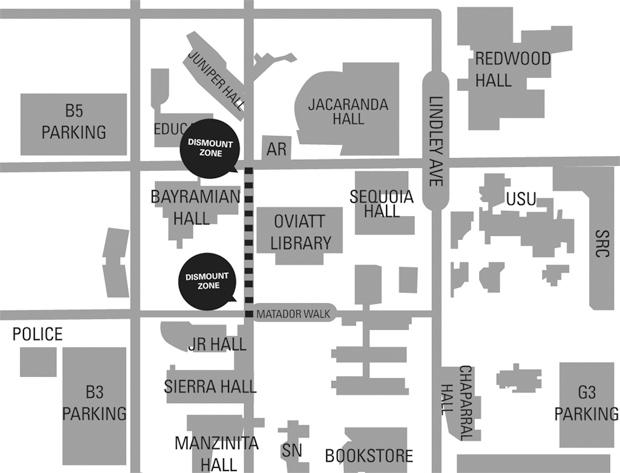 CSUN Police Department is distributing fliers to educate students and faculty about the new dismount zones.

Anybody on a bicycle, scooter, skateboard or roller blades will be required to dismount their equipment in certain areas around campus.

If anyone does not adhere to the new rules and dismount at the appropriate zones they will be fined approximately $150. This citation may also include a court appearance and court costs. Campus police will start enforcing these rules in the next two weeks.

Capt. Alfredo Fernandez said that if students feel they were cited unjustly they will have to appear in court to fight it.

“It’s almost like getting a traffic ticket but you don’t get a point against your [driving] record,” said Fernandez.

The campus police department said this new rule creates pedestrian safe zones that “aim to lower the risk of injuries to the community.”

Each dismount zone will require students to get off of their equipment and to “walk their wheels” until they are out of the dismount area, said campus police.

This new safety endeavor was implemented as a result of a collaborative effort between Facilities Planning, Design & Construction, A.S. and campus police for the safety of pedestrians and for those on wheels. In March 2013, A.S. approved dismount zones in heavy pedestrian traffic areas where collisions and injuries are more likely to occur.

These new safety measures are due to the large number of accidents that occurred on campus last year. From January 2012 to June 2013, there were 190 bike related injuries and 170 skateboard related injuries, according to a report by the Klotz Student Health Center.

“[The police] aren’t doing a good job of warning students,” said Isabel Piña, junior psychology major. “They should send us an email.”

Several bikers said that it isn’t fair that pedestrians walk in the bike lane.

“If cyclists are fined in pedestrian zones, pedestrians should be fined in cycling zones,” said sophomore psychology major Christian Belding.

However, Fernandez said pedestrians may be cited for walking in the bike lane too.

“This is a nice compromise,” said Fernandez. “All you have to do is walk your wheels in the dismount zones. It would be unfortunate to cite anyone.”

Several students said that a $150 citation is extreme, especially on a student budget.

They suggest a warning first and then a citation. Also, students suggest that dismount zones should be effective only during certain hours such as rush hours on campus.