Fantasy football: Players on the rise heading into the season 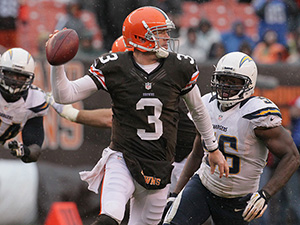 Although the NFL preseason may seem meaningless when it comes to team rankings, it can have a major impact from an individual standpoint.

Like the stock exchange, the preseason determines the rise and fall of potential players. Some plummet while others breakout, raising expectations of fans and coaches across the country.

After Colin Kaepernick took over for Alex Smith, Davis disappeared from the offense and it was clear that the two weren’t on the same page.

Things seemed to get better in the postseason, as Davis caught 12 passes for 254 yards and a touchdown in three games.

Thanks to the development of their relationship, the tight end has been lining up at wide receiver in training camp this year

According to the Sacramento Bee, Davis has been “the perfect match for Kaepernick’s ever-improving long ball, and has been by far the most consistent deep threat.”

With Michael Crabtree’s indefinite torn Achilles injury, the 49ers will have to incorporate Davis more into their offense. Expect him to have a huge role this year and return to the formidable, pro- bowl level we are accustomed to.

BRANDON WEEDEN – Last season didn’t go so well for Weeden during some stretches. It looked like he couldn’t hit water if he fell out of a boat.

But despite the lackluster year, the 29-year-old showed signs of hope during the preseason. In his first outing against the St. Louis Rams, he went 10-13 for 112 yards and a touchdown on a crucial third-and-goal throw.

In an interview with the Cleveland Plain Dealer, former NFL head coach and ESPN analyst Jon Gruden expressed his faith in Weeden.

“I think they need to build around Weeden and improve the receiving corps,” said Gruden. “I’m confident he’s going to be a good pro quarterback.”

Weeden finished the preseason with 334 yards , three touchdowns and no interceptions. Being named the official starter should give him confidence heading into this season and Brown’s fans something to hope for.

EDDIE LACY – Everyone knows what Aaron Rodgers can do slinging the rock but imagine adding a physical, elusive back to the Packer’s already potent offense.

With the recent injury to running back DuJuan Harris, the door is wide open for Lacy to be the No.1 featured back in Green Bay. In his first preseason action Lacy racked up 40 yards on 8 carries against the Rams.

The threat of an explosive rushing attack will open up play action for Green Bay strengthening their deep ball.

Don’t be surprised if Lacy gives Rodgers and the Packers something they’ve been missing for a long time, a legit running game.