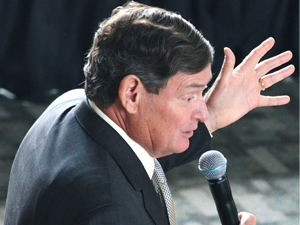 Upon entering, White was met by A.S. President Chris Woolett, who introduced the chancellor to the board and reassured him that CSUN is unlike any other CSU.

“As you will see throughout the day, CSUN is very unique from all of the other universities,” Woolett said.

A.S. Vice President Talar Alexanian followed Woolett’s lead and gave a brief speech informing the Chancellor about current events and successful programs on campus. Matador Exchange, Matador Camp, and the new Matador bicycle shop were among the few successes mentioned. “So as you can see we’ve been busy, ” said Alexanian.

White participated in a question and answer (Q&A) session in which senators and board members could ask a question and get it answered by the Chancellor himself. White started off the Q&A session on a humorous note.

“I felt the vibrancy of this campus as I was pulling off the 405 onto Nordhoff at 8:00 this morning,” he said, resulting in unanimous laughter around the room.

The Chancellor then mentioned that the condition of our economy seems to be stabilizing going forward, and according to him there will only be modest increases in tuition fees to come. White also said that his four main goals as Chancellor are to provide the following tools to students: access, quality, affordability and completion.

“I am the first person to have this job who graduated from a Cal State University, so I’m one of you, I’m on your side, “ said Chancellor White.

The Chancellor then continued to answer several questions asked by members of the board, and encouraged those who have questions or concerns to express them.

“I think your voice as students is the most powerful voice you can have,” White said.

Woolett, along with VP Alexanian, presented Chancellor White with a CSUN baseball cap, Big Show sunglasses and t-shirt and a framed photograph of all of the A.S. members.

The chancellor left the meeting with a few words of encouragement for students. “Seek success and manage failure,” he said. “And if you fail try again.”