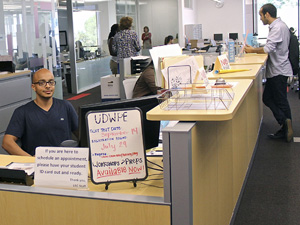 With the start of the Fall 2013 semester CSUN students were greeted with a renovated Oviatt Library.

The revamped first floor of the Oviatt is now called the Learning Commons where new carpet, furniture, tables, study rooms and new sections like an IT Help Center have been built.

“The library is more open, more bright, (and) the colors are more appealing,” said junior Jennifer Okuhara, a business management major.  “In the old library the atmosphere felt kind of sleepy. But now it doesn’t feel like an old library.”

Additionally, to accommodate technology, there is now a new section for students to rent laptops and iPads from the library. There are also eight new study rooms that students can reserve online.

“The Learning Commons is a combination of different facets including space, technology, partnerships among people and entities on campus,” said Mark Stover, dean of the Oviatt Library.

Aside from the new furniture and look, the Learning Commons now has a Freudian Sip shop near the entrance of the library.

“The goal was to modernize the library and also to make the space more attractive to students,” said Marianne Afifi, associate dean of the Oviatt Library. “We wanted to make it more comfortable for students and put in the things that students were interested in.”

Mircea Pitariu, a kinesiology major, said the renovated library is not only functional, but also convenient for students.

“I like all the signs they have that point students in the right direction. I like the Freudian Sip as well. It keeps everything in one place. So if you’re hungry and want to study it’s convenient for you,” Pitariu said.

Afifi said the Learning Commons will be a more loud environment, and for students who prefer less noise, the upper floors of the library will remain a quiet area.

“It feels like a place you can come and study,” said Marlene Barrientos, an undeclared sophomore. “I feel like sometimes it can get too loud on the first floor. But overall, I do think the change is good and probably needed.”

Byron Guzman, a senior marketing major, said integrating multimedia technology in the library may not improve the studying habits or learning skills for students.

“Technology can make it harder for people to concentrate,” Guzman said. “With their laptops instead of books people are more tempted to use Facebook and Youtube instead of studying.”

The Learning Commons isn’t the only new addition to the library. The Learning Resource Center (LRC), originally located in Bayramian Hall, has been moved to the third floor of the library.

“Some people confuse the LRC and the Learning Commons because they both have learning in their names,” Stover said. “The LRC is a tutoring and writing center on campus. Many people don’t know this, but many years ago the LRC used to be in the library. So we’re sort of going back in time recreating and reinventing the LRC.”

The LRC offers tutoring in many subjects and also hosts various workshops such as a tutorial program for the Upper Division Writing Proficiency Exam (UDWPE), according to Rocky Zamora, staff coordinator at the LRC.

“The LRC is a student-centered department and we try to have as many classes covered and as many tutors available as possible,” Zamora said. “We have Facebook and Twitter that we update so people can know when we are booked and when they should schedule for an appointment with us.”

Zamora recommends setting up an appointment a week in advance before the due date of an assignment.

“The learning center is great for helping me with the proficiency exam that you have to pass before you graduate,” said Kevin Su Yingnan, a junior finance major.

The LRC is also equipped with a Science and Math And Related Topics (SMART) Lab, a space dedicated to help students in science and math and currently employs 150-200 student tutors who are available to assist their fellow matadors.

The entire project for renovating the library cost about $2.4 million. The funding came from various different sources, including the Chancellor’s Office and the Campus Quality Fee, according to Stover.

Inspiration for the library renovation came from other campuses, according to Afifi. Before the project started, several CSUN librarians visited libraries at UCLA, USC and CSUDH. They also looked at photos of Cal Poly SLO, Humboldt and UCSC’s newly renovated libraries.

“I hope that the typical student will now feel welcomed, they’ll look around and they’ll see a bright, open atmosphere,” Stover said. “But more than that I want students to have various kinds of places in the library to study depending on their own learning style and needs.”