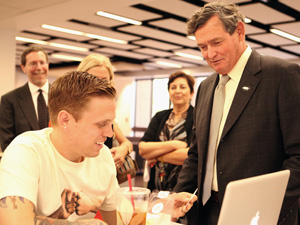 California State University (CSU) Chancellor Timothy White visited CSUN on Monday for a town hall meeting and a subsequent campus tour that reflected a theme of candidness and sparked conversation among students and faculty.

White’s visit to CSUN included a town hall meeting at Plaza del Sol Performance Hall in the University Student Union (USU), which was filled to capacity.

The running theme throughout the meeting revolved around compensation, faculty diversity and student integration.

When asked if faculty would be compensated for the salary cutbacks they have received since 2008, White answered that the cutbacks were a result of numerous budget cuts.

“We’re not going to do anything different with the people who are the heart and core of this institution,” White said. “We’re trying to distribute $38 million in new salary money this year. When you write that down across 44 thousand employees, its not a lot of money and I recognize that. I wish I had more money, but I don’t.”

White has been widely praised for receiving a 10 percent pay cut when he became chancellor, and for 23-year-old art major Edgar Ramos, it is something he’d love to see other people in positions of power do.

“It was very modest of him  and I think it’s the right way to be,” Ramos said. “If the chancellor is OK with getting a pay cut, I don’t see why it should be an issue for anyone else.”

White received a pay cut in an attempt to illustrate to other CSU leaders, faculty, and staff that they must all play a part in rebuilding the higher public education system, according to a report by The Sacramento Bee.

Student integration became another hot topic as Health Science professor Ronald Fischbach asked if there’s a chance colleges will be integrated with each other, allowing students to be enrolled in all CSU campuses.

“His response to my question gave me some hope that perhaps sometime in the future we will see an increase in cooperation between the campuses in our system,” Fischbach said.

Fischbach also said White seemed very open and approachable and it was nice to see in someone of his position.

Upon his arrival, White was first welcomed by Associated Student (A.S.)  President Chris Woolett at the weekly senate meeting.

“As you will see throughout the day, CSUN is very unique from all of the other universities,” Woolett said to the chancellor.

At the meeting, White participated in a question and answer session where senators and board members were permitted to ask a question and have it answered.

Later, as part his campus-wide tour, White made a stop at the CSUN Pride Center.

Upon his arrival, White walked in and sat on a colored pouf, a cushioned-backless chair. Seeing that three students were hanging out at the center and relaxing on a couch sans footwear, the chancellor proceeded to take off his loafers, to their delight.

White kicked off his mid-afternoon tour at the university’s Brown Center in the Center of Achievement, where he took the opportunity to meet with staff and view the center’s therapeutic exercise areas.

“This is a world-class facility,” said White after touring the center. “It’s robust in terms of engagement with the students, the quality of the facilities and the care and concern for the range of disabilities.”

After meeting with staff at the Brown Center, the chancellor visited the Matadome, Student Recreation Center, campus fuel cell power plant and Veteran’s Resource Center, where he was able to speak with student-veterans.

“These men and women have served us, or are going to serve us,” White said. “It’s our responsibility to serve them and to make sure that they have opportunity, either before or after military service — particularly if they are injured — to have a knowledge-based life.”

White said CSUN’s Veteran’s Resource Center is similar to Operation Education, a scholarship program that White founded with his wife to serve veterans with permanent disabilities while he was president of the University of Idaho.

Both the Veteran’s Center and Operation Education, White said, serve the needs of veterans in their efforts to attain a higher education.

After arriving at Oviatt Library, White, accompanied by library Dean Mark Stover, toured the recently remodeled facilities and continued to have spontaneous conversations with students as he and his entourage walked through the study areas.

“He’s very accessible to the students,” Stover said. “He enjoys talking with them, getting their viewpoint on things. It’s very refreshing.”

White concluded his day by cutting the ribbon to and officially opening the university’s Matador Achievement Center (MAC) on the fifth floor of Bayramian Hall. The center was made possible by a $900,000 grant from the NCAA.

One of the goals for the new MAC is that it will expand academic support for student-athletes by offering services such as one-on-one tutoring and mentorship.