Ice Hockey: Matadors look to build off experience and compete at the highest level 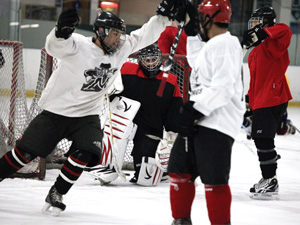 The CSUN Ice Hockey team brings fresh faces along with experience as they develop their roster to compete in a challenging division.

From 2008-2011 the Matadors were dominant in the Division 3 Pacific Collegiate Hockey Association (PCHA) by making the championship three consecutive years.

Because of that success, they were moved up to Division 2 in the American Collegiate Hockey Association, but struggled adjusting to the higher level of play and finished 6-12 last season.

“We moved up a division and we lost nine players, including three All-Americans,” Gale said. “Replacing them offensively just hasn’t happened yet.”

Coming off of a “rebuilding year,” the team began their first week of tryouts Friday at the L.A. Kings Valley Ice Center, where they saw a large combination of returning and new players, according to junior defender Branden Casillas, who is starting his third season on the team.

“It was probably the biggest (tryout) turn-out that I have been apart of in my three years. There is such a big mix of players in different skill ranges that it made it a really fun try-out,” Casillas said.

One of the top new recruits on the ice Friday, was freshman Alex Reints, who Gale has been working to bring to CSUN for two years.

Reints was the top scorer in the California Amateur Hockey Association and led his team to third place at the national championships this year.

“On my last team, I was practicing five days a week with them and doing private lessons before practice, then we had games on the weekends,” said Reintz, who did independent study his last two years of high school to focus on hockey.

The story of a life-long commitment to hockey is a trend throughout the team, which Gale says is essential for a six-month season.

Casillas has been dedicated to hockey for 18 years. After seeing the “Mighty Ducks” movies when he was 3 years old, he began practicing in his garage before his mom found an ice rink near their home in Texas.

“For a college kid, it’s a lot of dedication. They are students first who want to play hockey as well,” Gale said. “We play 20-30 games a season, and practice at 7 a.m. four days a week. We are looking for guys that really want to be on the team.”

In addition to hours of practice, every member of the team has to pay upwards of  $2,000 to fund part of the Ice Hockey budget. Associated Students also contribute around $17,000, Gale said.

“Everyone sacrifices four or five days of their time, everyone hits the gym on their own time and it’s not a cheap sport to play,” Casillas said. “We pay a little over $2,000 to play and that right there says commitment to me. It’s not a club that you can just come and go at, and I think that is why we become so bonded, because everyone wants to be there so bad.”

Sophomore Ryan Kunisaki found out about the ice hockey team midway through his freshman year, after recovering from a torn anterior cruciate ligament, and joined the team last year in the middle of the season.

“We play because we love hockey,” Kunisaki said. “For me, I don’t like just sitting there watching. It annoys me. I really want to play.”

Kunisaki spent the summer working for Base Hockey in Canada, where he taught kids how to perfect their technique.

“Hockey is what I know,” Kunisaki said. “Playing at CSUN was a chance to continue playing hockey.”

Captain Eric Roberts, who is starting his fourth year on the team, is looking to lead his team to the ACHA regional tournament and followed by the national tournament.

“As a team we hope to move forward. We fell victim to the injury bug last season and it kind of hindered the results we wanted,” Roberts said.  “It all starts with taking it a game at a time and performing to our fullest capability night in and night out. With the guys on the team this year, all of these goals seem very attainable.”