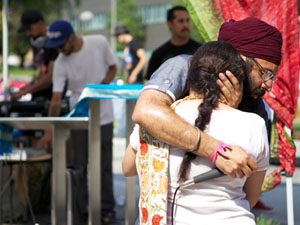 Dozens gathered to celebrate the spirit of Jusdeep Singh Sethi at a memorial service held in Matador Square yesterday to commemorate his 21st birthday.

Sethi, a CSUN student who drowned on Aug. 11 during a family trip to Big Bear Lake, was well-known for impacting many lives and always spreading positivity.

The celebration brought together some of Jusdeep’s passions such as art, nature and hip-hop music. Attendees potted small plants in origami pots made from newspaper pages and created cardboard paintings with spraypaint.

Jusdeep Sethi was involved in many organizations focused on humanitarian and environmental causes. A recent project Jusdeep Sethi helped organize was “Bridging the Gaps: Hip-Hop in the Age of Mass Incarceration and Deportation” conference, which has been postponed due to the death.

“He was really good at crossing bridges,” Ratcliff said. “He would engage everybody, whatever their level was.”

During the memorial, Jusdeep Sethi’s parents were presented with a certificate of recognition in their son’s honor by William Watkins, vice president of student affairs. Watkins said the certificate was signed by CSUN President Dianne Harrison.

Marvin Jordan, 24, an Asian American studies major, was a member of the poetry slam team with Jusdeep Sethi and performed a poem in his honor.

“Jusdeep was a great guy to be around,” Jordan said. “He always (supported) people and stood up for what he believed in.”

Preet Singh’s decade-long friendship with the deceased continued while he attended CSUN as an information systems major.

“Jusdeep was nothing more than a free spirit,” Preet Singh said. “He was just all over the place, wanting to love everybody, wanting to be loved and to spread love; that’s all he was about.”

Jusdeep Sethi’s brother, Mandeep Sethi, performed at the celebration and said the spirit and soul of his brother has given the Sethi family strength.

“It’s been a deeply spiritual process for us to be able to channel his spirit and his soul and channel the strength that it had and that it has to give us strength,” he said.  Mandeep also said that despite Jusdeep being gone, his spirit will never be forgotten.

Preet Singh’s brother, Manmeet Singh, remembers Jusdeep Sethi as a person who had a gift for interacting with others.

“He would put 200 percent of effort into trying to just get to know every single person out there, trying to understand them and trying to help them if they needed help, or get help from them to help other people he already knew,” Manmeet Singh said.

Mohinder Sethi expressed deep thanks to CSUN for organizing the memorial event for her son.

“We as his family want to do whatever we can to continue his legacy here, whether it is helping a student [or] helping the organizations to continue to work together, [we] will be here for CSUN.”