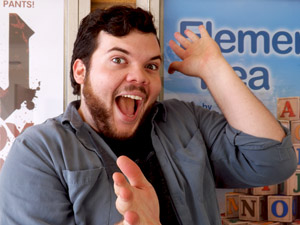 CSUN student Kevin Shacter spent most of his teenage years in front of the television. With a bowl full of cheerios, he’d lounge around watching sports or his favorite show, “Whose Line is it Anyway?.” All of his hard work paid off. Shacter is currently the president of the CSUN Improvisational Club.

The 22-year-old screenwriting major caught the acting bug by chance when his mother forced him out of the house after being home-schooled throughout most of his high school education.

“She kicks me out of the house one day to go take some classes at a community college, and one of them was an improv class, and I just totally fell in love,” Shacter said.

Realizing he had a knack for comedy, Shacter immediately signed up for classes after high school. He joined Second City’s teen troupe and took classes at the Upright Citizens Brigade.

“Every week we had rehearsals for three hours and then we’d put on a free show for anybody off the street who wanted to come in and see us,” Shacter said.  “It was just a great way to gain experience and meet friends and also learn about the art itself.”

But things took a nose dive when Shacter arrived at CSUN two years ago.

“I got here and I was so excited to join the improv club and there wasn’t one,” Shacter said.

To fill his improvisational cravings, he took an improv class offered by the theatre department, and there he met others who shared his passion for comedy.

“We started to make stupid jokes and sneak into classrooms doing scenes and eventually we got some people who were interested, and it spread like wildfire from there,” Shacter said.

And so the club was born, but not without its ups and downs.

“When I first got here I tried to get this group started and it took me about a year because I didn’t know how to do it or what to do and I asked probably seven or eight [theater] professors and I didn’t get any support or any  help,” Shacter said.

But every cloud has its silver lining, and for Shacter that was theater professor Douglas Kaback, who has been the club adviser since 2011.

“I really appreciate when students take initiative,” Kaback said. “In Kevin’s case, his passion for acting and improvisation was evident and I was glad to be able to support him as he led the way.”

Once the club was given the green light, the group began its rehearsals with Shacter taking the reigns.

“I don’t consider myself a teacher because I’m still a student, so I can’t basically lead the rehearsal as if I’m the all-knowing and powerful improv god,” Shacter said. “We can try to make it a group effort so we’re all pitching in our knowledge together.”

According to multimedia major and fellow actor, Shayna Woods, Shacter works hard to create a creative space for his club members.

“He puts a lot of work into making sure people have a place to come, and not that people take him for granted, but sometimes they don’t see how much work he puts into it so that we have a safe place to be creative,” she said.

For Shacter, improv opened up a world of possibilities that weren’t feasible before. From acting to screenwriting, he’s already had a taste of what his future could hold.

He recently signed with an agency and booked a role on the widely popular FX series “Anger Management,” acting alongside Hollywood bad boy Charlie Sheen.

“I was so scared,” Shacter said. “We were on set and he walks in smoking a cigarette inside the studio looking like he’s walking in slow motion, shaking everybody’s hand; he was really nice to me and saw how nervous I was but he patted me on the back and it was a really good scene.”

Whether he’s writing scripts, acting on stage or just teaching improv, one thing is certain.

For Shacter, improv will never be far behind.

“If I can do improv for eight dollars an hour, like for the rest of my life, then I’ll do that. I’ll be happy,” Shacter said.