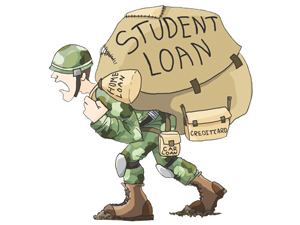 The company is accused of excessive interest charged on veterans’ student loans despite clear legislation prohibiting such practices.

In 2008, the Federal Deposit Insurance Corporation (FDIC) filed suit against Sallie Mae – a private company that specializes in non-federal student loans, savings accounts for education  and online banking – claiming “weaknesses in its compliance function,” according to the quarterly report issued by Sallie Mae in June 2013.

The FDIC, which insures consumer bank deposits and extends financial protection against economic losses when banks fail, is focusing on Sallie Mae’s compliance with the Servicemembers Civil Relief Act.

The act limits lending organizations’ authority to collect from borrowers who have defaulted on their loans. It also caps loan interest rates at 6 percent for military personnel even on loans before a lender joins the military.

Despite the cease and desist order, the FDIC has continued to keep a watchful eye on Sallie Mae due to their past practices while monitoring  its ability to comply with the Relief Act.

The company manages “$234 billion in education loans and administer $38 billion in 529 college savings plans,” according to Sallie Mae’s website,

Lili Vidal, Director of CSUN’s Financial Aid and Scholarship Department, does not predict the FDIC investigation will negatively affect the number of veteran students enrolling in the future.

“Because we are a relatively low-cost institution, students are able to meet their financial need through federal and state grants and loans. Only students who are not eligible for federal loans, or who have excessive costs, really need to take out private loans,” Vidal said. “Less than 1 percent of our students have private loans.”

Federal attention has previously focused on mortgage lending, but has shifted to student loans as more veterans return from war and enroll in college according to the report.

The number of veterans eligible for enrollment in the Fall 2013 semester at CSUN is about 700, according to Eloisa Smith, the veterans coordinator at the Veterans Affairs Office.

Smith declined to comment on Sallie Mae’s lending practices citing the federal nature of the investigation.

In 2011 alone, nearly one million American veterans have been eligible for educational benefits since the 2009 implementation of the Post-9/11 G.I. Bill, according to the U.S. Department of Veterans Affairs. The G.I. Bill was originally implemented to secure college degrees, vocational training, or unemployment benefits for soldiers returning from World War II.

Once enrolled in post-military institutions, veterans claim tuition and fees, a housing allowance, a yearly book and supply stipend for up to 36 months. So far, $20 billion in benefits have been paid to veterans or their family members according to U.S. Department of Veteran Affairs.

“We’ve invested a lot in our compliance efforts to ensure our military customers receive excellent service and the benefits to which they are entitled, but we understand some concerns persist and we realize that the bar is getting higher,” Christel said. “We are committed to continuing to make improvements that will make it easier for service members to access their benefits.”