Let’s go clubbing: a look at different clubs at CSUN 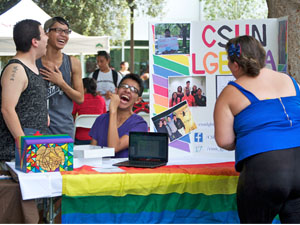 LGBTQA – CSUN’s Lesbian, Gay, Bisexual, Transgender and Queer Alliance (LGBTQA) is not only an organization that provides a safe place for students to open up and share their personal thoughts, but it is also a gateway to long lasting friendships. Students on campus that may have a hard time discussing their sexual orientation with friends and family can now have a secure place to turn to.

Timothy Nang, 20, a queer studies major, is LGBTQA’s public relations officer. He has been a member since 2011 and has experienced positivity through the organization.

“I feel safe. I feel I could be open. I feel I could finally be myself,” Nang said. “I hope each and every identified individual or ally becomes a part of this big family.”

LGBTQA is always willing to accept new students no matter what their sexual orientation may be.

FASA – Starting college can be nerve-wracking. For some, being in a group of individuals with whom they share a cultural connection can help calm the nerves. The CSUN Filipino American Student Association (FASA) is an organization on campus where Filipino/a students can come together as an ethnic group and build strong relationships through cultural similarities.

FASA not only provides a place where Filipino/a students can interact with each other, but also learn more about their culture.

It is a place where students can feel they are always welcomed and supported.

The club organizes an annual Filipino Cultural Night (PCN). Ariyana Nues, 22, a biology major, joined FASA and could not be happier with the experience and time spent as a PCN coordinator and club member.

“I fell in love with what (FASA) stood for: leadership, friendliness and passion. And today here I am, with one of the bigger positions on the board,” Nues said.

PCN is open to the public at no cost and FASA welcomes any member from the local community to attend. At the event, Filipino culture is shown through music, dance and theater. FASA welcomes both Filipino/a and non-Filipino/a students, who are interested in learning and being a part of the community and culture.

SAE – The Society of Automotive Engineers (SAE) is an organization for students with an interest in cars. By joining SAE, students can gain hands-on experience and build friendships with others who possess similar skills in the field.

Luiz Oliveira, 25, a mechanical engineering student and club member, said there is nothing else he’d rather be doing. Students who are involved with SAE have the opportunity to design, build and race cars they put together, according to Oliveira.

“The SAE program gives students an opportunity to come as one and design something from scratch, then take it out and compete alongside other top-tier schools,” he said.

SAE holds a yearly competition called Formula SAE where different teams from other schools design and build their own prototype cars. After, they race them to see which team’s vehicle takes the first place position. The event is sponsored by big automotive companies, such as General Motors, Ford, Chrysler and Honda.

This year, SAE designed their most lightweight vehicle yet. Coming in at only 340 lbs, this car has received a lot of recognition at the Formula SAE competition.