Re-read those books from high school 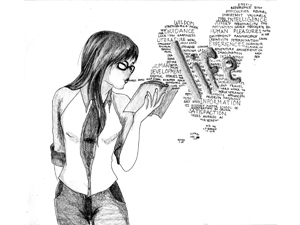 During an intimate conversation with Holden Caufield, Mr. Antolini, Holden’s former English teacher, introduced a quote in hopes that he would convey to him the importance of persevering, despite any reservations we may have because of the challenges we face.

I first stumbled upon this quote when I was 16 years old, while reading “Catcher in the Rye” for A.P English during my junior year of high school. Unfortunately, much to my chagrin, I did not quite grasp the profundity of this statement, due to, ironically, my immaturity and lack of focus.

For me, throughout middle school and high school studying assiduously and reading the material assigned certainly was not on the top of my priority list; however, I do realize that this is rather common for many of us during such an uncanny time. After all, anybody who has taken a basic human development course can attest that our brains are far from being fully developed at that age. In addition, with a plethora of physiological, psychological, and behavioral changes taking place during adolescence, it is rather difficult to digest the information that is forced upon us. Hence, this is precisely why I vehemently suggest that each and every person revisit the classics our nation has at our disposal, many of which were assigned to us in high school.

This past summer I had the privilege to re-read some of the classic literature that I previously threw aside in my younger and more naïve days, some of which included: “A Picture of Dorian Gray,” “Walden,” “The Fountainhead,” and many, many more inspiring reads. More than ever, I began to grasp why it is that many school curriculums incorporate these classic novels. The potent wisdom that these pieces of art contain is unprecedented; such as the aforementioned quote above, there seems to be sacred knowledge spilled onto the pages that can help us find our way in this journey we call life. On the contrary, I do realize that these reads can tend to be tedious and menial; however, the compelling information they contain is well worth our efforts. It is no coincidence that many of our world’s greatest leaders turn to classic literature for its guidance and insight. Even our own president, Barack Obama, has stated that he is an enthusiast of Shakespeare’s “Hamlet,” due to the innumerable references he can turn to. This is simply one example out of hundreds, so I encourage you to hunt down those reads and discover how you resonate with the infinite intelligence it contains.

As many of you know, currently there are constant changes surrounding us and many sociological issues that challenge us to fend for ourselves. Even here at CSUN, there is such a diversity amongst groups of students that it can become easy to lose your way. Furthermore, for those of us who are experiencing that awkward transition from young adulthood to adulthood, I’ve learned that referring to the classic literature assigned to us in high school provides no better way to receive the guidance we need in order to survive these unique times.

For me, personally, entering adulthood has proven to be the most difficult time of my life; dealing with the pressures of choosing a major, the stressors of relationships, work, and even battling clinical depression, nothing seems to provide the comfort my being craves as much as my library full of books. The wisdom, inspiration, and hope they provide continuously lifts me out of my despair and gives me the confidence I so desperately need to carry on.

Interestingly enough, in a speech given at the Teen Choice Awards, Will Smith passionately expressed what he believes to be one of the keys to life: reading. He elaborated on his claim by stating this:

“There is no problem or struggle in this world that at least one person has not experienced and later on written a book on it. Anything you may experiencing, whatever it is, can be found in a book and may provide the answers you’re looking for.”

To no surprise, admittedly, Will Smith’s perception on reading resonates and strikes a chord within me. Up to this very day, I am still utterly astounded when I come across a character whose dialogue seems to be written just for me. For example, just when I’m facing issues of self-sabotage and self-criticism due to certain behaviors, Oscar Wilde’s witty and free-spirited writing reminds me how one should not feel guilt nor shame for engaging in human pleasures. Of course, the way he crafted his work is far more eloquent than I could ever exude, which is exactly why they are referred to as classics.

Reading, just like music, affords us the opportunity to relate and feel that we are not alone in our struggles, which leads me to my wish for you: revisit the classics that were assigned to us in high school and give them another shot. After all, due to this practice, I consequently switched over from a pre-nursing major to an English major. Perhaps the effect won’t be as dramatic for you, but I do guarantee you will close the book a better person than before.

Lastly, I’ll leave you with a very profound statement I discovered while reading Ralph Waldo Emerson, which undoubtedly left an indelible impression upon me:

“What lies behind us and what lies before us are tiny matters compared to what lies within us.”