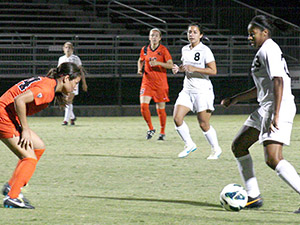 This was the second victory for CSUN against a Pac-12 opponent since 1999. The last win came against Arizona State a year ago.

The game had three total penalty kicks, two by the Matadors and one by the Beavers, which CSUN head coach Keith West thought was unusual. All three kicks were converted.

The Matadors took an early lead when the Beavers committed a foul inside the box 15 minutes in.

Senior defender Chloe McDaniel was chosen by her teammates to be the one to kick.

“I walked up there with confidence because the whole team looked at me like ‘Chloe you’re taking this PK,’” McDaniel said. “I have some history with this goalkeeper (Sammy Prudhomme) because I’ve played summer ball with her, so I didn’t know if she would guess my side.”

Prudhomme did not remember McDaniel’s side, and the Matadors grabbed a 1-0 lead.

It was not long into the second half for CSUN to get an insurance goal, as freshman Camille Watson scored her first career goal 30 seconds in.

The goal came off of a throw-in. Junior defender Leandra Walker inbounded the ball to senior midfielder Amanda Smith who crossed it over to Watson. Watson was able to place the ball in the left corner of the goal, giving the Matadors a 2-0 lead.

“It was unreal,” said Watson. “I didn’t expect it and it just happened.”

Watson started the game for the Matadors, but was subbed out for the rest of the half and then returned for the second half.

“Coach told me I hadn’t been running to the lines, so I just tried to run to the line,” Watson said. “Then I just happened to be in the perfect spot.”

CSUN capitalized on their second penalty kick in the 58th minute when junior midfielder Hannah Wissler kicked it past the keeper.

The Matadors then gave up a penalty kick of their own in the 67th minute.

Oregon State’s Natalie Meiggs was chosen for the Beavers to take the kick and put the ball past Matador sophomore goalkeeper Cynthia Tafoya.

The game started to get physical towards the end, but coach West likes that his team is fighting. The Matadors have won two out of three games and are showing signs of improvement.

“It’s perseverance,” West said. “You go play all those top-25 teams and you battle, and you go on the road for as long as we did, and it wears on you, and for the girls to keep persevering and fighting, that’s what I’m proud of.”

West knows there is still much to improve on. He wants his girls to continue to read the game and have a feel for it.

“I think every game so far we have gotten better,” McDaniel said. “We are still studying film, we are still studying our weaknesses, we work on little individual things in practice that have started to show in games. We’ve had seven weeks of practice and started off slow, but now things are starting to click.”

West believes the tough start to the schedule has helped his team grow, and for them to continue on with their success, according to West, the Matadors need to “Do what we do.”