Punk rock: appropriated but not dead 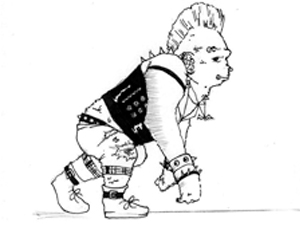 I still remember my first rock show: I was about 12 years old and was headed to the Long Beach Arena to catch No Doubt headlining with The Distillers and Garbage as the opening act. Upon my arrival I couldn’t help but feel intimidated by the large amount of people covered in tattoos and piercings. The significant yet occasional mohawk or liberty spikes (long hair styled in thick upright spikes), would pop up every now and then, and I couldn’t help but wonder, “where am I?”

I was immediately enthralled by the scene around me; the smell of beer and cigarettes flowing throughout the arena, and the safety-pinned-up punks who came to show their support for their girl Brody Dalle of punk band The Distillers. The lights went low and Dalle appeared on stage wearing a fishnet shirt, a skirt tailored for a school girl, combat boots, and the coolest upright hair-do I’ve ever seen. Then, she started screaming.

That was the moment that my taste in music drastically expanded. Now I know my first introduction to punk could never be compared to seeing legendary 70s and 80s punk bands like The Clash, The Ramones or even Minor Threat live, but it was enough to keep me intrigued.

The question of whether or not punk rock music is dead has haunted the scene ever since its first emergence in the 70s as an anti-authoritarian, purposefully simplified and rebellious reaction to Stadium Rock like Styx, Pink Floyd and the legends of that era. From their 1978 album “Feeding of the 5000,” the UK anarchist-punk pioneers Crass released a song titled “Punk is Dead” with lyrics that do a great job in summing up the dissatisfaction with the term and trend:

It’s just another cheap product for the consumers head.

But it ain’t for revolution, it’s just for cash.

Punk became a fashion just like hippy used to be

And it ain’t got a thing to do with you or me.”

Three years later The Exploited, another UK punk band, released their debut album with title track “Punk’s Not Dead.” Unfortunately, their lyrics were not as sharp:

“We’re all punks and we don’t care

Run about every night.”

When considering this one must contemplate that the meaning of punk has evolved since its first establishment. Punk can be broken down into three main components: the attitude, the style, and the spirit of the music. The term punk was previously used to define individuals as worthless hoodlums, or slang for gay or queer. However, the punk scene rightfully appropriated the term, replacing the derogatory meaning and helped shape it into something empowering.

When punk originated in the 1970s (although it is said that it was born in Peru in 1965 with the garage band Los Saicos) and peaked in the 80s, the world was introduced to a movement that was loud, fast, angry, and–to some–fashionable. Punk music was known to be outspoken and contained offensive lyrics that stirred controversy, yet the scene created a devoted following of adults and adolescents, but primarily kids.

When I say angry, I mean rebellious. Take for example the Sex Pistols, an English punk band, which formed in 1975 that paved the way at the time. Sex Pistols’ frontman Johnny Rotten had no problem preaching his dislike for the Parliament and the Queen of England, while promoting a wave of anarchy and contempt for all institutions. While rebellion became the common foundation behind the early punk scene, many believe that this is what punk thrives from all around the world.

Not only is punk still alive, it still holds the same meaning and significance from its old days. Punk exists in an evolved state of mind, which is necessarily different from what it was. If punk never evolved or changed, it wouldn’t be alive.

“…It’s nigh on impossible for any sort of subculture to remain cutting-edge and relevant for 30 years…and in any case, the subsumption of punk into the mainstream started to happened pretty damn quickly,” says columnist Tom Hawking of Flavorwire in a recent article titled “Who Does Punk Belong to in 2013?”

Would bands like Green Day, the Offspring, and other radio punk bands constitute as actual punk? At one point in time people did define them as punk bands because their careers thrived from punk origins. While Green Day may have taken their punk enthusiasm in a different direction musically, the deliverance of punk messages are still present in their music. Remember “American Idiot?” Who could forget it? The album heavily criticized former President George Bush, evoking a wave of anger and rebelliousness similar to that of the Sex Pistols. Though the message is what normally constitutes what punk is, it needn’t always be regarding rebellion.

Another aspect that majorly attributes to punk aside from the attitude is the style. Nothing is more definitive of punk visually than the style itself. Safety pins, sleeveless shirts and leather jackets, tight, torn up jeans, occasionally colorful hair, mohawks, liberty spikes, charged hair, shaved heads, tattoos and piercings, the list can go on for what visually defines a punk.

But does one need to (literally) wear the punk on their sleeves in order to feel like they are a part of the movement?

I feel that because punk has evolved in many ways, it’s not necessary to dress the part in order to show appreciation for the music. There are plenty of “plain Janes” and “average Joes” who rightfully appreciate the music just as much as any other punk without wearing the “punk appropriate” attire, which is an interesting issue – probably even controversial to some. Many punks follow an anti-authoritarian and anti-conformity tendency, but at the same time find it acceptable to put on the easily-identifiable punk uniform.

At the end of the day, people just need to appreciate the music for what it is, not how they display their appreciation for it.

So is punk dead? It’s safe to say my answer is a flat out no. Just because it has evolved over the course of time does not diminish the fact that it’s an appreciated musical genre. In fact, there are so many subgenres within punk that it would be hard to just define punk as a single particular genre. The fact of the matter is that punk has evolved and found a way to recreate itself to define new meanings that are less negative and more positive. It’s up to the purists whether or not they think these new forms will suffice for their always beloved punk movement, but for now it’s safe to say that punk, with or without the mohawks and ripped jeans, is here to stay.