Another victory for Mayweather’s unblemished record 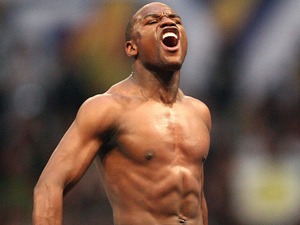 What else is new? Coming into Saturday’s megafight, boxing fans said Canelo Alvarez will be Floyd “Money” Mayweather Jr.’s toughest opponent in a very long time. It ended up being a typical day in the office for Mayweather: bring him in the ring, play amazing defense and counter Canelo for 12 rounds and improved his record to an impressive 45 wins.

Jab after jab and hook after hook, Mayweather was continually chopping at Canelo’s body and face. Coming into the ring with rapper Lil Wayne performing “A Milli,” Mayweather definitely made a “milli”, $45 million to be exact, and is reported to make close to a $100 million after the fight due to Pay-Per-View sales.

Coming into the fight, Mayweather weighed a very chiseled 150 pounds. Canelo on the other hand came in at a heavier 152 pounds, which explained itself during the fight. Looking bigger than Floyd, Canelo’s punches were slower and much sloppier than what we’re used to seeing.

Mayweather, the smaller opponent, was constantly backing Canelo into the corner and out-punching him. With a controversial majority decision, Floyd takes the win, although one judge called the fight a draw, which was very hard to swallow. Every fan watching was hoping this wasn’t another Pacquiao vs Bradley, where Pacquiao single-handedly beat him down but ended up losing the fight.

Whats next for Money Mayweather? Well he’s scheduled for four more fights under Showtime’s contract and he’s nearly cleaned out the division. There are many opponents that fans want to see fight Mayweather but the name that’s coming into everyone’s mind is Danny Garcia. The young up-and-comer Garcia is smooth and packs a punch. This fight needs to happen and I truly believe it will. Mayweather wants to cement his legacy as one of the best fighters of all time and this fight will help him to do that.

Other names that aren’t as popular would be Timothy Bradley and Manny Pacquiao.

Timothy Bradley is a decent boxer that doesn’t take many chances so he’s not a brand name that can generate sales or excitement to the boxing world.

Manny Pacquiao is on the decline after getting knocked out by Juan Manuel Márquez. The best opportunity for Pacquiao to fight Mayweather would have been last May in his prime.

Floyd wants to be the best and sees himself as the best. With another fight scheduled in six months, he is slowly but surely solidifying his legacy not only with his fans, but boxing fans as a whole.