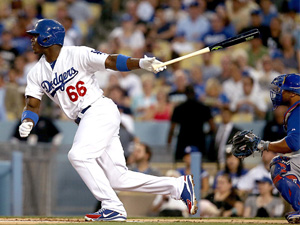 When a group publicly led by legendary L.A. Laker Magic Johnson bought the Los Angeles Dodgers last March for over $2 billion, fans all around the world rejoiced. A team that just months before had filed Chapter 11 bankruptcy became the most expensive sports franchise that had ever been bought. And after extensive improvements to the stadium and team, including the $260 million Red Sox megatrade for players Adrian Gonzalez, Nick Punto, Carl Crawford and Josh Beckett, L.A.’s ball club has once again emerged as a true contender.

But the road to October is not paved in gold. Coincidentally, the big AL team this season is the Boston Red Sox who boast the best record in the league led by veteran David Ortiz.  One can only hope for an east coast west coast showdown. But in order to even face an AL team in the World Series, the Dodgers have to face some tough NL competitors including the NL East favorite Atlanta Braves, who seek to clinch the division title. The Braves have won five of seven games played against the Dodgers this season toting an 89-59 record.

The St. Louis Cardinals and Pittsburgh Pirates are battling for the NL Central division title, the Bucs earning their first winning season since 1992. The loser of that race will face the Cincinnati Reds in a one-game elimination series to move on as the NL Wild Card. The Dodgers have posted winning records against both the Cards and Bucs this season, but not the Reds.

The NL West’s first place Los Angeles Dodgers (86-62) have had a historical season, but it definitely didn’t start out that way. Early injuries to shortstop Hanley Ramirez, left fielder Carl Crawford and center fielder Matt Kemp halted team momentum. In July they were saddled in last place, but what the team didn’t know was that they were in the midst of making baseball history. In their next 50 games from June 22, the Dodgers went 42-8, the best 50-game stretch in baseball since the 1942 St. Louis Cardinals.  When that streak ended, the Dodgers had improved from a 30-42 record to a 72-50 record.  A big influence on that streak was Ramirez’s return from the DL and the debut of Cuban phenomenon Yasiel Puig. The 22-year-old outfielder was called up in June and became the first Dodger to hit multiple home runs in one of his first two major league plate appearances.

With only 13 games left, the Dodgers’ magic number is 4, the lowest in the league, and could be the first team in the league to clinch a playoff berth.

But in true Murphy’s Law fashion, Hanley Ramirez was taken out of Thursday night’s game because of back pain. On the bright side, Manager Don Mattingly expects Matt Kemp to be back for the postseason after being out for the last two months nursing injuries.

But the fact remains, the Dodgers will be making their first postseason appearance since 2009 after a little Laker magic saved the day. Whoever said money doesn’t matter never went through bankruptcy.