If signed into law, new abortion bills will allow non-physicians to perform abortions by medication or aspiration techniques 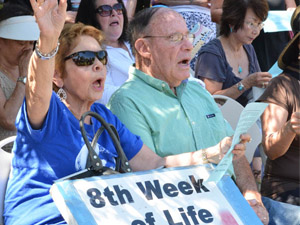 Saturday afternoon, Heather Mechanic clutched her “8th Week of Life” abortion poster at the Odd Fellows Cemetery to remember the lives of more than 16,000 unborn children that were buried there.

Mechanic and her husband traveled from San Diego to Los Angeles to participate in the National Day of Remembrance memorial to honor the children’s graves and to learn more about California’s new abortion bills currently going through legislation.

When she was a student at Columbia University during the 1970s Mechanic had an abortion. She now wants to bring awareness with her testimony to stop what she calls a “holocaust.”

“I just didn’t have a thought until someone finally told me ‘abortion is murder,’” Mechanic said. “In all these years I suffered so much. I couldn’t have any more children. I was left sterile and I kept thinking about my baby. And the depression was overwhelming.”

In the 1973 Roe v. Wade court case, the U.S. Supreme Court declared that all women, with the consultation of their physicians, have the constitutional right to protect themselves by choosing to have an abortion during the early stages of their pregnancy.

In the 1992 Supreme Court case Planned Parenthood v. Casey, the court upheld their previous decision to allow women the right to abortion. In addition, this case “expanded the ability of the states to enact all but the most extreme restrictions on women’s access to abortion[s].”

California’s new abortion bill, AB 154, which is awaiting a signature from Gov. Jerry Brown, will allow non-physicians to perform “an abortion by medication or aspiration techniques in the first trimester of pregnancy.”

According to the bill, “a person with a license or certificate to practice as a nurse practitioner (NP) or a certified nurse-midwife (CNM) shall complete training recognized by the Board of Registered Nursing.”

Dianne Bartlow, professor and chair of gender and women studies at CSUN, said it’s time for women to receive more protection, as their rights have been under attack for a while.

Astrid Bennett, the president of Hispanics for Life and executive director of Los Angeles Pregnancy Services, attended the National Day of Remembrance memorial and said that people need to be more informed in order to take action.

“People don’t get involved until they realize that every day 4,000 unborn babies are killed and their parents are hurt physically [and] emotionally,” Bennett said. “The pro-life movement is here to say that every human life is valuable, is sacred, and there is help.”

Bennett said she had the opportunity to help a CSUN student last year.

“She was in her junior year. She [had] amazing grades, she was doing an internship, and she found herself pregnant.”

Bennett said she helped the student and she was able to have her baby and graduate at the same time.

“She told me that the baby gave her more motivation to get ahead,” Bennett said.

California is currently in the process of passing two measures that will provide women more access to abortion alternatives.

If the bill is passed, the training required for NP’s and CNM’s will begin on Jan. 1, 2014. The standards in which registered nurses and midwives will have to meet in order to perform an abortion using medication or aspiration techniques will be decided by the Health Workforce Pilot Project (HWPP).

The HWPP program “allows organizations to test, demonstrate, and evaluate new or expanded roles for healthcare professionals, or new healthcare delivery alternatives before changes in licensing laws are made by the Legislature,” according to the State of California Office of Statewide Health Planning and Development.

Brian Johnson, western regional director of the National Right to Life Committee, urged the attendees of the National Day of Remembrance to call Brown and ask him to veto the bills.

“If these new bills are passed, abortion will be second grade medicine,” Johnson said. “The people doing these abortions won’t have the medical training to help women if there [are] any accidents,” Johnson said. “There is going to be great risk and we already know there are complications in abortion.”

A 2013 study examined the consequences of removing the physician-only requirement for aspiration abortions in California. The report showed that abortions performed by newly trained NP’s or CNM’s were “not inferior to [those] provided by experienced physicians.”

Johnson said these bills will not only change the standards of the clinics, but they will also turn abortion into a “cheap” decision that will increase the number of women who get abortions.

Brendan Mallory, 18-year-old screenwriting major, said that there are certain life circumstances in which abortion is the necessary option.

“If you’re poor and you know you can’t really support the kid and it’s just going to starve and have a miserable life anyway, it might be the right choice,” Mallory said. “I know it’s difficult to kill a child, how could it not be, but there are circumstances when I think abortion would be necessary.”

While one in three women will make the decision to have an abortion by age 45, many women do not have access to early abortions because “of the limited number of physicians providing the services in their communities,” according to a 2013 report by Planned Parenthood.

In California, nearly half of the counties do not provide accessible abortion providers, an issue that AB 154 aims to address.

“I am pro-choice,” said Lesia O’Connor, 22-year-old psychology major. “[But] that does not necessarily mean I am pro-abortion. I feel that it is no one else’s decision except a woman and her doctor what she should do with a life growing inside of her.”