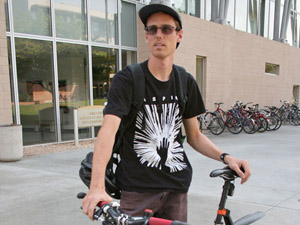 When Dennis D’Alfonso transferred from Santa Barbara City College to CSUN in 2010, he envisioned a campus that would accommodate students who used bicycles as a main source of transportation.

Throughout his first year at CSUN, he became a founder and active member of the Bicycle Club on campus, whose name was later changed to the CSUN Bicycle Collective.

While majoring in mechanical engineering, D’Alfonso found that having a minor in sustainability would help integrate his passion for mechanics and cycling.

“I was already into sustainability and caring for the environment so that was away I could integrate that and cycling,” D’Alfonso said. “I came from Santa Barbara which is now fairly well-known for being bicycle friendly.”

His passion for cycling began when he worked at a bicycle shop in high school as a mechanic. He then started using the bicycle as his sole mode of transportation. After establishing his presence with the CSUN Bicycle Collective, D’Alfonso continued his work toward a bike-friendly campus by minoring in sustainability and working closely with Dr. Helen Cox, the director of the Institute for Sustainability.

While minoring in sustainability, D’Alfonso helped create the first bicycle report for CSUN. According to a 2010 Institute for Sustainability survey, 74 percent of faculty, students, and staff commute to CSUN. It takes an average of 14.5 miles to commute to campus from all over Los Angeles and Ventura, though the majority commute from the San Fernando Valley.

This information concerned D’Alfonso, so he became active within the Transportation Working Group (TWG), a subcommittee under the Institute for Sustainability. Within this subcommittee, D’Alfonso took part in discussions of the implementation of bicycle racks and bicycle lanes on campus, as well as the new bicycle lanes that are now on Lindley Avenue.

“I enjoy the struggle of fixing the problem, and I noticed there was a need for that,” D’Alfonso said.

Along with his participation in the TWG, D’Alfonso advocated for the CSUN Bicycle Collective to help create bicycle clinics on campus. The bicycle clinics were created to provide students, faculty and staff with free bike repairs and maintenance services.

Due to these efforts, the Bicycle Collective was able to reserve space on campus for bike maintenance and repairs.

He also met with the coordinator of the plan over the summer to establish the fundamentals for the space before he and other members of the collective graduate next spring.

The location for the bike clinic has not yet been determined because logistics are still being considered. The space is due to become available to students next spring.

With only three years spent at CSUN and one semester left to complete, D’Alfonso can take pleasure in the work that he’s done to help make CSUN a more bike-friendly and bike-knowledgeable campus.

“I love sharing my knowledge about bikes,” D’Alfonso said. “If you learn something and know a lot about it you should just pass it on. The process of doing that is a great feeling, and you can share that and empower an individual. I found a lot of joy doing that at CSUN.”