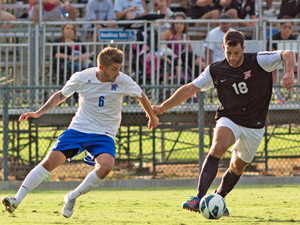 The Matadors (6-0-0) defeated the University of Central Arkansas (3-2-0) 4-1 and stunned the University of New Mexico (3-1-1) 3-2, en route to capturing the 2013 TLC Plumbing, Heating & Cooling Lobo Invitational, extending their winning streak to six games.

In the opening match against Central Arkansas, a late second half rally helped CSUN secure the win.

The Matadors controlled the pace early on, stretching the Bears defense with well placed passes.

After freshman midfielder Juan Samayoa’s shot was deflected by the Bears defense, the ball bounced to Lev-Ari who buried the rebound past goalkeeper Taran Meyer.

The Bears bounced back in the second, leveling the score 1-1 in the 49th minute.

Taylor Hart received a touch pass from Jaden Hoth at the top of the box and drove past the Matadors defense, beating sophomore goalkeeper Adam Hobbs from close range.

Seventeen minutes later, Lev-Ari responded with his second goal of the game. Junior defender Mynor Giron one-touched the ball to a wide open Lev-Ari who overpowered the Bears goalkeeper with a thundering shot.

In the 80th minute, Central Arkansas was whistled for a handball in the box, leading to a Northridge penalty kick. Senior midfielder Chris Smith converted, recording his second goal of the year.

Four minutes later, junior forward Edwin Rivas put the game out of reach thanks to a cross by junior midfielder Yarden Azulay.

CSUN’s stifling defense held Central Arkansas to one shot on goal, while their offense bombarded the bears with 11.

The championship game proved to be the Matadors’ toughest test yet as they were heavily out shot (4-11) in the first half by the University of New Mexico Lobos.

Despite the barrage of shots, it was the Matadors who opened up the scoring in the 28th minute of play.

After Lev-Ari’s initial shot was blocked by the Lobos defense, senior forward David Turcios cleaned up the rebound, sending the ball into the gaping net.

UNM’s offense tested Hobbs three times in the half but each time the Matadors’ goalkeeper came away with a save.

With 10 minutes left in the first, senior forward Brian Behrad stole the ball at midfield, drove his way inside the box and gave the Matadors a 2-0 lead.

UNM’s persistence finally paid off in the second half.

The Lobos were awarded a penalty kick in the 65th minute, following a Northridge foul inside the box.

Although Hobbs guessed correctly, Michael Calderon’s shot curled just past his fingertips into the left corner.

The Matadors relied on their counter-attack to regain the two goal lead in the 71st minute. Following a Northridge clear, Turcios crossed the ball into the box and Lev-Ari tapped it in from the right post.

Despite being down two goals the Lobos kept pressing and were rewarded in the last minute with a rebound put-back by Niko Hansen.

Hobbs sealed the game for CSUN catching a cross with 20 seconds remaining.

Coming into the match, UNM had allowed three goals on the year.

This is the first time the Matadors have won in Albuquerque in eight tries, and the 6-0 start marks their best since the 1987 season.

“Sometimes a win isn’t pretty but with everything going against us in terms of the atmosphere and elevation, I am proud of our players for coming together and beating one of the top programs in the nation,” said head coach Terry Davila in an interview with gomatadors.com.