LAFD responds to emergency outside of VPAC 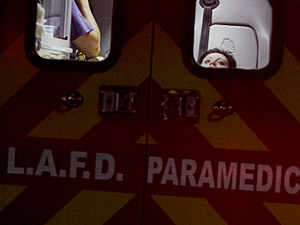 A Los Angeles Fire Department (LAFD) firetruck and ambulance were outside Valley Performing Arts Center at approximately 9:40 p.m. in response to an emergency call.

A woman, identity unknown, was assisted in the ambulance for 30 minutes before LAFD rushed her to the hospital.

Two CSUN Police Officers were on the scene assisting LAFD at the time of the incident. Both refused to disclose any information about what happened.

“A call has been made to Christina [Villalobos] and there will be a report,” the male officer on the scene said.

A young man, who said he was a friend of the woman,  stood beneath a light post and watched the ambulance. The young man did not provide any information about what took place. He said that he did not know what happened.

It is unknown what injuries the woman sustained and why LAFD was called. The ambulance departed at 10:13 p.m.

Police officers look on as the student is treated inside the ambulance.