CSUN Orange Grove provides fruit for those in need 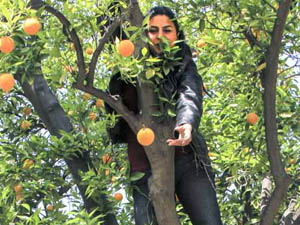 The crowd of 35 volunteers gathered in the shade of CSUN’s historic orange grove in the name of charity.

Volunteers from the Institute for Sustainability and Food Forward, a non-profit organization that connects food banks with local produce that would otherwise go to waste, gathered at the grove on Saturday to pick the season’s last oranges.

“President Obama designated Sept. 11 as a National Day of Service and Remembrance as a way for people to get together and increase the bonds among communities,” said Sarah Johnson, administrative coordinator at the sustainability institute. “That’s why we tied in with that day, we want people to get out in the community and do something positive.”

Lyons said the donated fruit is an essential supplement to local food pantries that focus on supplying hungry residents with daily necessities.

“Fresh produce is crucial for food pantries,” said Lyons. “Since 2009, we have been able to rescue and donate 1.6 million pounds of fruit and produce from backyard trees, public parks, farmers’ markets, and wholesale markets.”

In 2010, the Los Angeles Regional Foodbank released a survey detailing hunger and food insecurities in the county. The survey revealed that close to one million county residents in 2009 received some sort of food assistance from food pantries, soup kitchens or shelters.

Children alone make up 40 percent of those in need of assistance.

The growing number of food insecure residents, those who don’t always know where their next meal will come from, is mirroring the country’s high unemployment rate. In 2005, food insecure households comprised 60 percent, according to the survey. That number had increased to almost 85 percent just four years later.

Director of operations with the SOVA Community Food & Resource Program, Fred Summers, has been working with Food Forward and the orange grove picks since the very beginning. SOVA, Hebrew for “eat and be satisfied,” serves more than 12,000 people in the Los Angeles area every month.

The program receives between 50,000 and 60,000 pounds of fresh fruit annually, mostly oranges from the San Fernando Valley, that supplement their regular food items, said Summers.

“Fresh fruit is an area where people have to scrimp on,” said Summers. “People fill up on things that are more filling, but not necessarily nutritious such as bread, potatoes, rice and starchy food. If you only have a couple of dollars to spend, people gravitate toward cheap and filling.”

Johnson also seconds  the value of donating nutritious items to food pantries. They rely on donations from private gardeners with surplus crops as well as volunteers who prowl farmers markets for willing donors among the vendors, according to Johnson.

“I know that healthy food that is free, and would otherwise be wasted, is always a good resource,” said Johnson. “A lot of the other food that pantries have—bread, canned goods, things like that from the grocery store—have a cost associated with it, whereas these oranges are just completely free and from mother nature. Why not give them to people so they can eat them, enjoy them and have some healthy food?”

Katie Campbell, a 32-year-old former CSUN student with a master’s degree in humanities, volunteered with Food Forward for the first time on Saturday.

Campbell stressed that “cost-effectiveness is a factor” when you have a limited food budget.

“If there were more organizations like Food Forward, there would be more access to fresh fruit,” said Campbell. “Hopefully, it’ll grow and spread out. There’s so much agriculture in California.”

Daniel Aguiar, 27-year-old senior mechanical engineering student, participated in the record-breaking April orange pick. Aguiar said he hopes the volunteer effort will continue, and possibly even expand across the nation.

“I believe that Food Forward does a tremendous job by diverting all this fresh food that would go to waste and giving to those in need,” said Aguiar. “It’s a beautiful thing!”

The mix of first-time and seasoned volunteers who showed up for the pick took to the citrus challenge with enthusiasm, and in the National Day of Service and Remembrance spirit.

“You meet people, you’re out in the sun, in nature,” said Johnson. “It’s an orange grove where you can see the duck pond, kids feeding the turtles and the fish, and it’s a really good and positive experience. I think it brings people together and raises morale. Even if the economy turned around, there’s still going to be a need for food pantries, and for public service.”