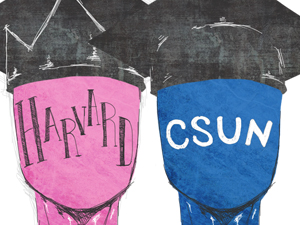 A recent study reveals a trend in which the most selective universities in the country are enrolling more White students compared to African American and Hispanic students.

According to the study, 82 percent of White students at the top 468 schools — i.e. Yale University, Harvard University, Stanford University and the like — accounted for all new enrollment from 1995 to 2009.

By comparison, new enrollment of African American and Hispanic students was a combined 22 percent to those same 468 schools.

The study suggests that family income does not fully explain the divide in new enrollment.

Low-income Hispanic and African American students graduate at a lower rate compared to White students with the same economic background, according to the study.

Selective universities are known for their high tuition. For example, Stanford University can cost around $42,000 per year compared to just above $6,500 for CSUN.

Carnavale said that even low-income minority students who are academically qualified to attend the top 468 schools often times don’t apply, and the reasons for this are still unknown.

“It’s difficult to go searching all of the country for qualified low-income and minority students,” he said.

However, in a study by Caroline Hoxby of Stanford University, highly-selective universities not only want low-income students with good test scores, but also strive to fund their education should they apply and get accepted.

The study states that “high-achieving, low-income students are considered very desirable by selective colleges.” Because of this, “students tend not only to be offered admission by selective schools if they apply, they also tend to be offered very generous financial aid.”

Former Georgetown student Ali Sharrow, 24, is a prime example. She received a significant amount of grants and scholarships because of her grades, ethnicity and family circumstances.

“Actually, Georgetown footed most of the bill for my education,” said Sharrow, who is Hispanic. “They wanted me enough that they gave me more money to make it work.”

Having worked in the admissions office while she attended Georgetown, Sharrow said that the prestigious Catholic university works very hard to be racially diverse.

“Admissions takes into account every single factor that could possibly affect a student’s performance in school,” Sharrow said. “If [they] see that a student comes from a rough neighborhood or had a tough family life, they are given more leeway in terms of grades than would a student who had higher grades but a perfectly supportive family.”

While the Georgetown study argues that racial diversity is floundering in the top 468 colleges, it also reveals that more minority students are enrolling in schools like CSUN, which are called “open-access,” or less selective (in terms of admission), schools.

According to the study, Hispanic and African American students account for 68 percent and 72 percent of new enrollments, respectively.

In 2012, CSUN had 29.2 percent White students, 35.3 percent Latino students and 6.1 percent African American students, according to the Office of Institutional Research.

Freshman mechanical engineering major Alex Marks, 18, said he chose CSUN not only because he has family and friends who have attended or are attending the university, but also because it makes the most sense for his career.

Marks is also impressed with the racial diversity that makes it one of the most diverse universities in California.

“There’s so much of an evening out of all the borders that there’s no one actual majority, or at least such a majority that it’s noticeable,” Marks said. “It’s actually really refreshing to see such a nice mixture that everything is balanced out and everyone has a fair opportunity and everyone gets to actually come here and learn what they want.”

The study was released by the Center on Education and the Workforce at Georgetown University.