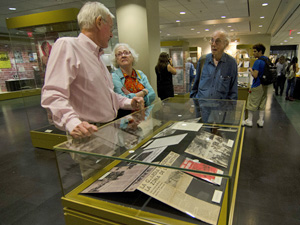 The words echo above the crowd, “clear the street, make your way to the sidewalk and disperse.” These words could be shouted by police at any number of protests throughout the years, but the focus Tuesday night was on the 1967 Century City anti-war protest.

The “In Protest: the Shifting Paradigms of Collective Social Action” exhibit was on display in the Special Sections wing of the Oviatt.

The two were joined by lifelong activist and organizer Irving Sarnoff and Robin Abcarian, a long-time columnist for the LA Times.

President Lyndon Johnson was coming to Los Angeles for a Democratic party fundraiser, and anti-war protesters planned to demonstrate outside the president’s gathering in Century City.  Sarnoff helped to organize the demonstration and Richard Abcarian was there with his three daughters to protest the Vietnam War.

The organizers and police thought the protest was going to be 1,000 students at best, but 10,000 took to the streets, and a surprising number of middle-class working people joined the ranks explained Richard Abcarian.

Downing was a sergeant with the LAPD at the time and explained how a lack of leadership and revised tactics after the Watts Riots led to a peaceful action being declared illegal then turning violent.

“As a result of police pressure, regular working people thought the demonstrations were too dangerous,” Sarnoff said.

Dr. Marie Cartier brought her students from her Gender and Women’s Studies class to the panel and exhibition. Cartier said, “the concept of the class is art can tell the truth like nothing else can,” and she thought her students could learn from seeing examples of protest art.

“It was interesting to see their point of view, and hearing about [Richard Abcarian] bringing his children to protests to witness both sides,” said Denzel Perez, civil engineering major freshman.

The art of protest is the focus of the “In Protest” exhibition, featuring everything from posters and pamphlets to news clippings on the second floor of the Oviatt. “In Protest” will run until July 25, 2014 in the C.K. and Teresa Tseng Gallery.