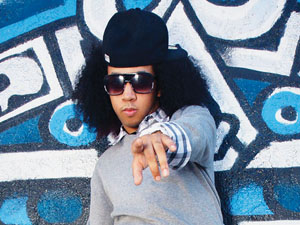 While working toward a degree in the school’s business law department, CSUN alumnus Archie Roundtree was also paying his dues in the rap scene.

Perhaps it’s best to refer to him by his stage-name, Tru-Ace. Walking off campus with diploma in hand this past May, Tru-Ace was laying down tracks in the studio for his “Neglected Kid” mixtape which dropped around the same time.

Within a few short months, Ace caught himself in a whirlwind of events that had him balancing his Law School Admission Test prep classes with performing aggressive sets in arenas like the LA Convention Center while recording in the studio with Tommy Boy Entertainment—the same label that brought you Naughty by Nature and Gucci Mane.

Check out the official video for Tru-Ace’s “Belly of the Beast” (feat. Cabby & Young Sam)

Sitting down with the Sundial, Ace talks about naming his mixtape, the balance of school and music, working on his debut album, his hopes of playing Big Show and how Skee-Lo influenced his pursuit of a career in entertainment law.

Daily Sundial: When did you first start rapping?

Tru-Ace: I was chilling with my cousin, he got in on punishment and couldn’t go to homecoming so we were just kicking it and I wound up not going to the dance either because I felt bad for him. There just happened to be some tracks available or whatever so I was just rapping to the tracks not really thinking of anything—I was just writing my thoughts down to everything that was going on, freestyle type stuff. We did a couple of them that night and one wound up being more of a rap song. I guess that was the first rap that kind of triggered me, that maybe this is something I would want to do.

DS: So what about your mixtape, “Neglected Kid?”

TA: The mixtape “Neglected Kid” came out a couple months ago. It that was just me talking about all my life, all my aggressions, everything that was going on with me, anything that I felt at the time. It even has funny stories [like] when I broke up with my girl. I don’t think she cared for that but it’s on the mixtape regardless. It goes from breakups to just the balancing act I was doing, trying to balance school, college life to this whole rappers world I was in, doing different shows to different struggles that just growing up you go through, as you get older and everything.

DS: How do you balance school with rapping?

TA: It’s a balancing act. You’ve just got to work hard in everything you do. My pops told me to compartmentalize, to put everything that you’re doing in this separate box. With going to college, you’ve got to focus on school, focus on your books. When you’re in the music, you have to focus your time. When you’re in the recording, studio you’ve got rehearsals, [you have to] take care of what you’ve got to do. I just focus my attention to whatever I need to be doing at that time. You have to realize that you can’t go to every party you might want to go to. You can’t go to every event. You have to go to things you know you need to go to and balance everything out with what’s important at the time.

DS: If your rapping took off before you started college would you still have pursued it?

TA: I don’t know. I was always used to doing the balancing act and college was something that I wanted to make sure I knocked out. First and foremost, I tell everybody school is super important. Being around the entertainment business, you’ve got to know the business part of everything. It’s crazy  , it is about the music, you need to put your heart into it, but there’s a business part you have got to know. If you don’t know it yourself as an artist, regardless of who gets involved with your career, what people are around you, no matter what cool studios you go to or what producers you’re with, it’s still a business. You’ve got to know what’s going on with you whether a contract comes your way or shoe endorsements and clothing sponsors. You’ve got to know what’s going on and it’s good to have that educational background so I’m glad that I have it. They respect you more too. It’s good just to have it in your back pocket.

DS: How did you get involved with Tommy Boy Entertainment?

TA: The timeline with that is so crazy. Literally it was graduating from college to registering for my LSAT prep classes to still working in this recording studio all during that time and doing shows and just making sure I’m focused. I never set out like “yo, I’m going to do this.” If this is my last interview, if this is my last show that I’m going to do, I’m gonna make sure it’s the most fun experience that I could possibly have. Then it happened where Tommy Boy—my management and them—they wound up getting in contact with each other then all of a sudden I’ve got my debut project with a major record label. With all the different people they’ve worked with from Gucci Mane to Queen Latifah and Naughty by Nature, it’s just a blessing for them to even put out my debut project and to be working so hard with them right now.

DS: Why did you choose to pursue business law?

TA: I always wanted to be an entertainment attorney. When I was younger that’s what I really wanted to do. I was around the music business since I was about 4 or 5 years old. Music was a passion because it was always in my household. My mom, she sings, my big brother, he’s a rapper from the 90’s and he’s got his projects going on now too. I was even introduced to my first music video [very young]. My older brother came out with a rap song called “I Wish” – “I wish I was a little bit taller, I wish I was a baller, I wish I had a girl who looked good I would call her,” that’s his song and I was in the video when I was a young kid. I was young in his music video, in “Top of the Stairs” you see me in that video all through it. I was around this whole whirlwind of the industry seeing my brother do everything and it was crazy. Just seeing all the different attorneys around, they really help careers, so it’s something I took to heart and was like “you know what? I’m going to be an entertainment attorney. I’ve got to do this.”

DS: Why did you title your mixtape “Neglected Kid”?

TA: I feel like everybody has that neglectful feeling. Whether it’s in a breakup situation you feel like that person neglected you or you neglected her. Even just being put in the whirlwind of college. That first experience of going to college, parents aren’t around. Nobody’s there to tell you what to do, you kind of feel neglected in a way at times because you feel like nobody’s going through the situations you’re going through. I was going through all that type of stuff and realized that everybody has a piece of neglect in their life coming from somewhere, so I felt like speaking for everybody who has that type of emotion or that type of feeling.

DS: After you finish your LSAT are you going to continue with school?

TA: It was crazy because it was one of those testing moments. I did my sound check, when I performed on that stage the lights weren’t supposed to be flickering. The strobe lights and all that extra stuff wasn’t supposed to be added to my set. I put everything I had into it. I freestyled at the beginning of it, after just showing some real rap stuff I just did my set. They started flickering the lights, the crowd got into it, it was a crazy show.  After the whole thing I just stood there for a minute taking everything in. It was that show where I was like “I arrived, I can do this.” It was one of those testament shows that I will always remember.

DS: Do you think you’ll ever be back on campus performing at the Big Show?

TA: I would be so happy, I think that would be a culmination of everything. That would be one of the shows I would be super excited to do because it won’t just be a performance—it would be a whole experience in itself because I’ll get to talk to the CSUN students, you know? Even after doing my debut song that comes out with the label, doing the Big Show would be a testament for all of us. I came from CSUN. I was in your shoes, probably had the same worries, the same family stuff that happens. But I’m here and I’m doing this. I could share that whole experience with the whole student body. Anything with music where I can tie in the CSUN campus, I hope I can do one of my first videos at CSUN campus, that’d be cool. I know Afrojack is performing this year but I would look forward to the next time Big Show comes around and I’m one of the people where they hit up my management and they want to get Tru-Ace to perform. “We heard his single’s coming out and we want him to come to the show,” I’d enjoy that phone call.

Check out Tru-Ace on social media: