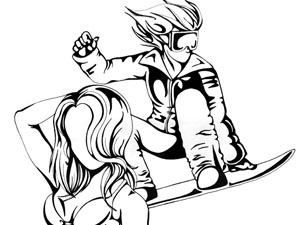 As the WNBA moves into the final stretch of its 15th season, attendance rose along with TV viewership and is at its highest since 2005. ESPN also reported that the network’s 12 regular-season broadcasts drew an average of 270,000 viewers, an increase from last year.

Even with all this obvious success and increase in popularity, it seems that the WNBA is still looming in the NBA’s shadow. This makes it difficult for female athletes to be taken seriously in comparison to their male counterparts.

Is this because female athletes don’t have what it takes to make it in the world of sports or could it be more of a social issue?

One of the theories behind this is that society doesn’t like to see women in roles that go against the norm of what a woman “should be.” The traditional female traits include being sexy, highly feminine, passive, graceful and weak. Nowhere does the word “athletic” appear on that list.

These female athletes are not just playing a sport that they excel in. They are breaking down barriers that have always left women outside the world of professional sports. The idea of a strong, fast, powerful woman leaves many feeling uncomfortable because it isn’t seen as an attractive or traditional characteristic.

Female athletes have trouble receiving equal pay when compared to men and getting sponsorship deals, making it difficult for them to stand out in their sport.

According to Forbes online, the world’s highest paid female athlete is tennis player Maria Sharapova, who is on top for the ninth straight year with $29 million in earnings from prize money, endorsements, and appearance fees between June 2012 and June 2013. This seems like a hefty amount until you compare it with Tiger Woods, who is the world’s highest paid athlete with $78 million in earnings (including sponsorships, endorsements, etc.).

It seems that in the world of sports, the disparity in pay between men and women is greater than the workers of the United States, in which women earn 77 cents for every dollar earned by men according to data from the Center for American Progress.

Women not only experience a pay disparity, they also encounter a different side of the media.

Although it is not outwardly stated, physical appearances (attractiveness, sex appeal) are very important if you’re a female athlete who wants to get a sponsorship deal because in order to sell, you need to appeal to the general public. In short, sex appeal matters.

“And why do they want to sell sex? Because beauty is important to this society, whether we are talking about sports stars or movie stars or people in general,” according to sports blogger Andrea Adelson.

When you think about the expectations that are placed on women, it’s understandable that a female athlete would put so much care into the way she appears in front of a camera. She is posing for her chance to have a sponsor, and having sponsorships means success.

In some ways, good looks have led many female athletes to come into the spotlight, seemingly making appearances more important than skills. The women that are willing to show a little skin are the ones that are most recognizable and even though they may have the athletic skills, they only gain popularity after their exposure (literally).

One example is snowboarder Hannah Teter, an example of a female athlete who has done it all. In 2006, she won gold in her Olympic halfpipe debut. Shortly, she started Hannah’s Gold, which is an organization that strives to help an impoverished village in Kenya. In the following years she won silver for another Olympic performance, second at the Burton U.S. Open and many other impressive awards.

Although she enjoyed success and modest fame, her celebrity took off after she appeared in Sports Illustrated’s Swimsuit Collection in 2010.

A documentary film titled “Branded” explores the double standard that is placed on female athletes and discusses how they not only have to be the best in their sport but also the most attractive in order to get any attention.

Heidi Ewing and Rachel Grady direct the film and express that female athletes “…have worked in equal parts talent and sex appeal …clearly, winning or being the best is not enough for a woman to rise to the top of the high stakes world of sports marketing.”

Overall, the disparity between what a male athlete must do in order to become successful is vastly different from their female counterpart.

She must be able to deal with receiving less pay than a man and pose for the camera in order to achieve a bit of spotlight and to prove that she is, in fact, feminine.

Aren’t those female stereotypes a bit outdated by now? Everyone needs to face the fact that there are women who dunk in the WNBA, race in NASCAR, ski, snowboard and are figure skaters at the Olympic level.

It’s high time that a woman proves she’s an amazing athlete by her moves on the field and not her poses in front of a camera.

I hope to see the day where the phrase “you play like a girl” is no longer an insult but a compliment.