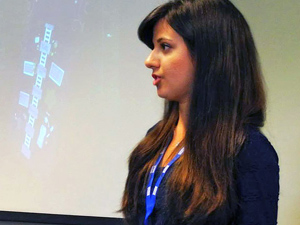 Sarkissian has been a student at Northridge for three years, but has accomplished more than one would imagine.

Sarkissian is the Chair of Clubs and Orgs at Associated Students, president of the Armenian Students Association (ASA) and CSUN Liaison for the American Association of University Women and a university ambassador of Unified We Serve. She lives and breathes matador spirit, and has divided her time so she can actively contribute to each club.

Lisa-Mone Lamontagne, who works with Sarkissian at Associated Students, talked about some of Sarkissian’s upcoming events and what she is doing at AS right now.

“(Alina) has very high school spirit. To be a chair of clubs and Orgs, she has to know about the majority of the clubs, and what types are on campus. She is involved in new student orientation and tabling for the clubs.”

Sarkissian believes in having a strong presence on campus. For that reason, she participates in various organizations. She has noticed that many students do not have much school spirit and hopes that through her efforts, more students will see how rewarding being an active part of the CSUN community can be.

As if all these organizations weren’t enough, when Sarkissian heard about the opportunity to participate in the National Conference for College Women Student Leaders, she knew she needed to be a part of it. The conference brings together students from universities across the nation and takes place over the course of a few days.

It all started out with a grant that the CSUN gender and women’s studies department applied for, to look in depth at the wage gap between men and women and the hardships that women are still facing with equality today.

Only six colleges received the grant after their proposals were submitted and the diligence and hard work of the group here at CSUN paid off.

“It’s something I’m tremendously proud of, not about myself, but for CSUN in general and the gender and women’s studies department. It’s really going new places and hopefully they can do it again,” Sarkissian said.

With the grant, a new course was formed focusing on finding out what students know about the gender wage gap and getting students involved in making a change. The class had about 15 people in it and was dedicated to researching the project.

Although a business major, Sarkissian immediately decided to sign up. At the end of the semester, the results were to be presented at the conference in Washington D.C. by a student representative. Sarkissian knew she wanted to be that student.

“I was dying for the opportunity. It was such a great public speaking experience and on top of that, it was a huge moment of pride for CSUN,” she said.

Gender and women’s studies major Michele Roberts accompanied Sarkissian on the trip and together they presented CSUN’s findings at the conference. They found that majority of students surveyed were unaware of the gender wage gap.

“About 90 percent of them were just appalled by the information and really grateful that it was being given out. We did have a small minority that just didn’t believe it was true, which was very interesting as well,” Sarkissian said.

Sarkissian spoke to the conference as Roberts handled the technical side of the presentation. The hard work of the semester was apparent, as the women received praise throughout the entire conference for their impressive presentation and findings.

When asked if she wanted to return to the conference next year, Sarkissian said she would love to but would want another student to get the experience that she had. She believes it would be selfish of her to go again through the program, she said.

Sarkissian’s involvement in the project lives on as she has been attending meetings around the Los Angeles area giving her presentation to different groups to spread the message of gender equality in the workforce.

The faculty advisor of the project, Shira Brown, has been setting up these meetings in hopes that the program can be continued in future semesters to spread awareness about the gender wage gap.

Having finished the research project, Sarkissian has settled back into helping the other organizations close to her heart. Fellow ASA member Christine Dashdermirians believes that Sarkissian has done and will continue to do great things as the president of their club.

“I am proud to be working beside her as the Vice President. Alina’s love and dedication for the Armenian culture will definitely make the (ASA) thrive throughout the academic year,” Dashdermirians said.