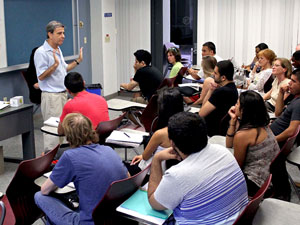 On Sept. 18, the day of the Jewish holiday Sukkot, which celebrates the fall harvest, CSUN’s Jewish Studies Program hosted a seminar highlighting the history and archaeology of ancient Israel and how it ties into the present.

Moshe Goldin is a former geography professor and archaeologist in Israel. Golden is also a well a licensed Israel tour guide.

“What’s happening today is based on everything that’s happened in the past,” said Paskow.

Although the geographical region of the seminar’s subject was present day Israel, Goldin covered not only the history of the Jewish people, but also ventured into the relevant history of Christianity and Islam as well.

“This history is significant because it is backed by the Bible. The more we dig, the more we see how correct the Bible is. The archaeology goes hand in hand with the Bible.” Goldin said.

Goldin had on display many rusted coins, nails, and pieces of glass which he had personally found that were tied to the ancient empires of Rome during their conquering of the promised land, more commonly known as present-day Israel.

“The trail is smarter than those who travel on it,” said Goldin, who is a man who doesn’t believe in shortcuts and lives by this saying. “It’s a motto for me, follow it and your life will be better”.

Even some non-CSUN students attended the seminar due to genuine interest in the subject.

“We’re both interested in history especially the archaeology of Israel,” said Walter Roig, who came with his wife Suzy, both of whom declined to state their age but said,  “It’s been 45 years since I’ve been in a history class.”

The seminar tied the history of the Middle East with the issues and conflicts that are going on today and where and when these conflicts came about.

“History repeats itself in one way or another and  I can tell you that you shouldn’t step foot in Iran, Syria, and Iraq because it is an ancient conflict that has been going on for ages,”said Goldin.

“Israel is in a complicated situation that needs refinement and examination,” said Depaoli. “It will require education from both sides.”

Professor Paskow and the Jewish studies program will be hosting another seminar on Oct. 2 about Crypto-Jews and the Sephardic community in L.A. at 11 a.m.