Student passes out near Matador Bookstore 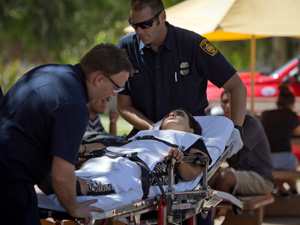 A female CSUN student was carried away on a stretcher near the bookstore after she passed out Thursday.

“The guy [sitting with the student] yelled ‘babe,’ we turned around, she was sitting down, [we] noticed her eyes roll back, the guy pulled out a phone and I assume he called paramedics,” said Jonathan Silva, 19, mechanical engineering major.

Paramedics arrived on the scene at 1:09 p.m.

Luis Medrano, 18, mechanical engineering major, was sitting at a nearby table when the incident occurred.

“The man held her and both of them walked over to the bench, she laid down, and he held her head,” Medrano said.

Captain Jim Bates of Los Angeles Paramedics said the student was evaluated and would be transported to a nearby hospital.