Poets and artists fill the Games Room to capacity for Espressions 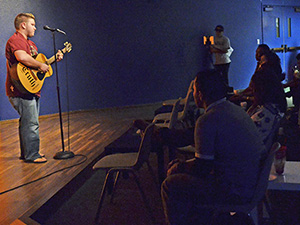 USU’s Games Room was filled to capacity Wednesday night for Espressions, a free event that welcomes students to share their poetry, music and art.

Danyial Motiwala hosted the night. Motiwala graduated from CSUN a year ago and was on the Poetry Slam team. As soon as Motiwala took the stage, he requested respect from the audience. “Just know we are here. This is Espressions. Just express yourself here,” Motiwala said.

All types of people filled the seats, individuals of different races, age, sex and sexual orientation. Refreshment. Some came prepared with paper filled with their words or instruments to play for the audience.

Refreshments were made available as the audience entered the Games Room. Everybody began introducing themselves to new friends and reacquainting themselves with old ones. Raffle tickets were given to the first 30 people for the chance to win gift cards.

Names were taken and displayed on a nearby screen listing the order in which people would perform.

Luz Adauto, freshman and child development major, was eager for the night to start and to experience Espressions for the first time.

“I came to Espressions tonight because I hope(d) to be inspired by the people who go up there and I hope to one day be up there with my own poems,” Adauto said.

Motiwala started the night with an originally written poem by the name of “We Are Poetry”. The poem was packed with the words of joy, pain, and the life of a poet that the audience seemed to all resonate with.

As the night continued on, the amount of poems and snaps received increased. Music was welcomed as well. Motiwala interacted with the audience between sets.

“Make some friends and enjoy the night,” he said, suggesting they record, take photos, and post them online with the tag “Espressions,” as well as give the artists their respect.

Motiwala complimented everyone in attendance and said they were a great audience. “Everybody (came) up here and we (all) had a good time,” said Motiwala. “The audience is so supportive.”

Espressions welcomes anybody that desires to express themselves in front of a welcoming audience. Some students that performed were previous members of the Poetry Slam team here at CSUN.

“I’m curious to see the student population at CSUN, the creativity, and meet people and explore,” said Gutierrez. “I’m new and don’t know anybody. I have to take the initiative and meet creative people.” Gutierrez has been a writer since middle school and read a poem for the crowd.

The next Espressions night will be held Oct. 16. That night, auditions for the Poetry Slam team will be held.