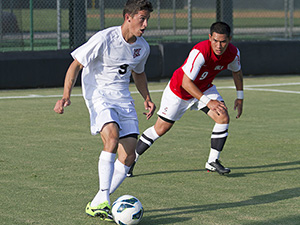 With the win, Northridge is just one victory shy of setting a new school record for the best start in program history.

“It’s an incredible feeling and a huge deal, we definitely have the team to do it and it’s just a great feeling,” said sophomore goalkeeper Adam Hobbs.

CSUN got rolling early, scoring in the eighth minute on their first shot of the match.

After receiving a pass from junior defender Mynor Giron, junior forward Edwin Rivas sent a timely cross to senior forward Beto Velasquez, who buried the ball into the open net.

The goal gave CSUN an early 1-0 lead, and Velasquez his first goal of the season.

The Rebels tested Hobbs in the 35th minute of play with a rapid volley of shots from point blank range. First Hobbs robbed Rebel forward Salvador Bernal and then he parried forward Joaquin Rivas on the rebound, knocking the ball out of play.

“I saw one of their guys running through, breaking tackles. He made a great play, putting in the work and breaking through and I just did everything in my power to keep the ball out of the net,” said Hobbs.

Lev-Ari picked the pocket of a Rebel defender and dribbled his way to the 18 yard box before unleashing a left footed blast that beat goalkeeper Ryan Harding.

Despite the two goal lead, CSUN was out shot 8-7 and 4-3 in shots on goal. The Matadors also accounted for two more fouls than the Rebels (6-4).

UNLV came out looking to level things in the second half and their persistence paid off when they were awarded a free kick near midfield.

Rebel midfielder Julian Portugal curled a long cross into the Matador box that found the head of teammate Rivas near the right post, narrowing the lead to 2-1.

The Rebels had a glorious opportunity to level the game at two in the 69th minute.

Benal was at the six yard box staring at a gaping net in front of him, but ended up hitting the left post.

With 10 minutes left in the game, UNLV managed to register only one shot on goal which was blocked by a Matador defender.

Northridge secured the victory by bleeding out the clock with a balance of pressure and ball possession.

Next up for the CSUN is an anticipated match against No. 11 UCLA in the TopDrawerSoccer.com Game of the Week.

Kickoff is scheduled for Sunday, 7 p.m. at the Matador Soccer Field.