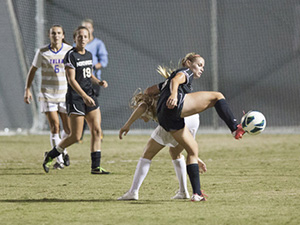 The Matadors (4-5)  secured their fourth victory in their last five matches by defeating the University of Tulsa Golden Hurricane (5-3) 1-0 on Friday night on the Matador Soccer Field.

She found the back of the net off of a pass from junior defender Leandra Walker with 14 minutes left to play in that first half.

Dickson almost had a second goal on a one-on-one with the goalie at the end of the half but was unable to play the ball cleanly.

The first half was very physical that left both coaches heated with the non-calls.

Both teams were flying to the balls colliding with one another that had both coaches screaming for cards to be awarded. One card was awarded when Tulsa defender Tori Peters tripped a CSUN player late in the first half.

The Matadors played a very physical game from the beginning and head coach Keith West is not afraid when the game becomes rough.

“It definitely plays into our hands,” West said. “We are a physical team, and a good team. I like it.”

The frustration for Tulsa’s coach intensified after head referee Bernhard Hosv called a foul against the Golden Hurricane that disallowed what would have been the equalizing goal towards the end of the half.

It came from a cross off of a free kick into the box where CSUN sophomore goalkeeper Cynthia Tafoya was able to snatch it out of the air. She then went crashing into the goalpost and fumbled the ball allowing Tulsa to score on an empty net.

However, the head referee waved off the goal and explained to the Tulsa coach that Tafoya was pushed into the post, forcing her to cough up the ball.

The second half was no different as the physicality continued to pick up. Both teams battled for the ball, throwing elbows, shoulders, and throwing their bodies around to shield their defenders from the ball.

Yet the style of play from the Matadors remained the same throughout the game.

The defense for the Matadors was stifling. Senior defender Wendy Warner is pleased with the way the defense has come together in the last few weeks.

“We are getting back to the basics in practice and it’s showing in games,” Warner said. “The biggest thing the coaches have stressed on is communication. We are communicating a lot better in the game and it is making us better.”

The defense would not be complete without strong play from the goalkeeper. With seven minutes remaining in the game, Tafoya came up huge in the closing minutes with a save from an uncontested shot from the top of the box. That save helped secure the win for the Matadors.

The Matadors will face San Diego on Sunday. This will be a rematch between the two schools where CSUN lost 3-1 on Sept. 1.

A win over San Diego will get the Matadors back to .500 for the first time since the beginning of the season.

“I’m going to let them enjoy this win tonight, but we will be ready to play Sunday,” West said. “We just have to stick to the game plan and play our game and we’ll be fine. Against a team we know, it should be a good game.”