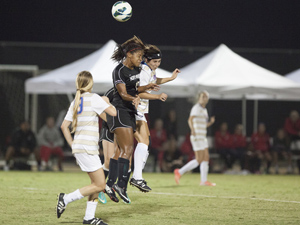 San Diego came out strong from the opening whistle putting constant pressure on the Matadors. The Toreros possessed the ball much of the first quarter of the game leading to a goal in the fifteenth minute.

“They (San Diego) are very good on the dribble, coming right at us and getting us to step to and finding the switches to get the crosses,” sophomore defender Hayley Greep said. “They are very composed and they don’t freak out when there is pressure on them.”

The game began to settle down after the first goal but the game took a turn when the Toreros put in the second goal five minutes before halftime.

Sophomore goalkeeper Cynthia Tafoya was unsuccessful in punching a crossing pass out of the box leaving the goal empty for San Diego’s Rachel Conners to score.

The Matadors outshot the Toreros 18-10, but the intensity level set by San Diego was not matched.

“We had a pretty big game on Friday night, and we are young, and to be able to handle the fact that we are playing another game on Sunday is a mature factor,” head coach Keith West said. “I don’t think our kids came out with the same attitude as Friday.”

The team did not complete plays they needed to or execute well enough to get the win, West said.  Another problem the coach saw was not having enough support in front of the net to capitalize on scoring chances.

“We really didn’t connect on the easy passes that we were focusing on connecting,” senior midfielder Amanda Smith said. “We put (the ball) in the air too much, and we are a very small team compared to San Diego.”

The Matadors were never able to get into their game plan, which, according Smith, was to play the ball wide and connect to players running through the middle.

“They were man marking us in the beginning, and that’s something they didn’t do before,” Smith said. “So I think that kind of threw us out of whack, and that’s why we started kicking it downfield.”

West was happy with his team’s offensive performance despite the loss.

“When we got the ball settled, and we received the ball and played it, we were very good,” West said.

The Matadors have one more game before league play begins, and Smith believes they have a good chance at contending for another league title.

Greep said the most important aspect from here on out is staying positive and to continue working on their weaknesses.

“We want to keep everyone strong and keep the positive energy, and when someone’s down we always have to bring them up,” Greep said. “In practice we just really have to stay focused and strong. We have done a really good job, especially with the back line in communicating better, and we watch a lot of film to see what we do wrong and we are still getting better.”