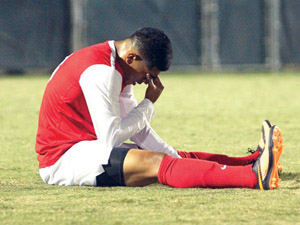 The Matadors saw their hopes of making history slip away with a 4-2 loss to UCLA, Sunday night at The Matador Soccer Field.

Two second half goals helped the Bruins hold onto their lead, handing Northridge its first loss of the season.

“We could have been a little more focused and precise up front,” said head coach Terry Davila. “We got an unfortunate P.K. I’m not sure where it was from and that kind of stuff changes the game.”

The Matadors controlled the tempo from the beginning, registering the game’s first shot and first corner kick.

CSUN’s best chance of the half came off the foot of junior forward Edwin Rivas, who sent a low shot that was blocked by the Bruins’ goalkeeper.

Despite the physical play of both teams, senior forward Brian Behrad was awarded the first yellow card with eight minutes left in the half.

With just a minute remaining the Matadors were whistled for a foul inside the box, resulting in a UCLA penalty kick.

Bruins forward Leo Stolz scored on the foul, beating sophomore goalkeeper Adam Hobbs to his left. Although Northridge was down a goal, they ended up outshooting UCLA 7-4.

Before the end of the half, head coach Terry Davila received a yellow card.

The Bruins controlled the tempo well coming out of the second half, forcing CSUN to chase the ball from end to end.

In the 38th minute, UCLA extended their lead to two. Bruin midfielder Ryan Lee crossed the ball to forward Victor Chavez who tapped it into the gaping net.

A minute later Northridge responded with their first goal of the game. Senior midfielder Chris Smith crossed the ball into the box and found the foot of senior forward Beto Velasquez for the goal.

The Bruins forced Hobbs to make a brilliant one-handed save minutes later, which led to a UCLA corner kick.

With 16 minutes left in the second, the Bruins regained their two-goal lead thanks to a well timed goal by forward Max Estrada.

After Hobbs made the initial save, Estrada kicked the rebound into an empty net.

UCLA put the game out of reach with a fourth goal when midfielder Felix Vobejda stripped a Northridge defender, and passed it to an open Chavez who tallied his second of the game.

“Both goals were two scrums, there wasn’t a lot of build up, a lot of beauty, they’re good on set pieces, they know how to fight for second balls, the style that they played was very opportunistic,” said Davila.

Despite being down three goals, the Matadors’ resilient effort paid off with just two minutes to play.

Junior midfielder Yarden Azulay received a through pass from sophomore midfielder David Turicos, and buried it past the Bruin goalkeeper short side.

Although their seven game winning streak was snapped, sophomore midfielder Trevor Morley is optimistic his team will defeat the Bruins should they meet again.

“We got outworked on the night, but toe to toe I think we can take them any day, none of our players our scared of them and I’m sure we’ll meet them soon enough.”