New study shows undergrads in Midwest are against guns on campus 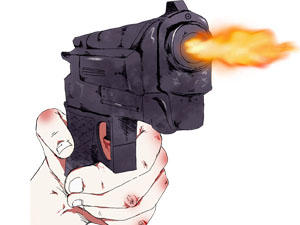 The study, conducted by Ball State University’s Global Health Institute, found that 78 percent of students in the Midwest oppose the idea of allowing concealed weapons on campus and would not obtain a permit to get one if made legal.

The study’s co-author, Jagdish Khubchandani, a professor at Ball State University, said in a media release that the study is just one part in a series of surveys examining gun violence in the United States.

In a 2009 study, he found that the majority of campus police chiefs are in favor of informing students and parents about “no firearms” policies on campus.

Though all CSU campuses have a no firearms policy (excluding police officers), CSUN has seen its share of gun scares over the last two years.

In January 2011, 22-year-old David Everson, a CSUN student, was caught with a shotgun and explosive materials in his dorm room.

In September 2011, sophomore philosophy major Gahren Moradian was arrested following an incident in which he allegedly claimed to have a gun near the entrance of the Oviatt Library as he was shouting at a pillar.

The threat prompted an extensive police search of the library which yielded no results. Moradian later turned himself in and pled not guilty to felony criminal threat charges.

In April, a suspected gunman was spotted leaving the Oviatt Library. Though police detained five students that fit the description of what he was wearing, the suspect, along with his alleged gun, were never found.

CSUN has also seen gun fatalities. On Feb. 6, 1987, a 25-year-old former student shot and killed an associate professor in a stairwell following an argument about a grade he received a year ago. He then fatally shot himself.

The study also found that 16 percent of undergraduate students own a gun and 20 percent of them have witnessed a gun-related crime on campus.

Though CSUN may have had gun incidents, the school is generally considered a safe university.

“You may get somebody who has a mental illness, under stress, or in the moment becomes irrational,” Ballard said. “But most of the time, this campus is very safe, we’re a suburban campus.”

In December of 2012, to further increase the school’s safety, CSUN police and other agencies conducted a drill which would prepare them in case an active shooter were on campus. Coincidentally, the exercise took place days before 20-year-old Adam Lanza slaughtered 26 students and faculty at Sandy Hook Elementary School in Newtown, Conn. with an assault rifle.

However, some groups believe that allowing guns on campus could be beneficial to safety.

“We don’t believe in any gun-free zones. We believe it should be up to the school itself,” said Sam Paredes, executive director of Gun Owners of California. “We support responsible faculty members that hold concealed weapons licenses because they have successfully prevented tragedies in the past.”

Obtaining a firearm in California can be difficult, as it has some of the nation’s strictest gun laws.

Open carry of any handgun is prohibited in public. In January 2012, the open carry of unloaded handguns became illegal as well after measure AB 144, which was signed in late 2011, came into effect. The sale, use, possession or manufacture of assault rifles is also barred in the state.

To be able to legally purchase firearms, one must be 18 years of age or older, pass a background check and take a handgun safety test, according to the Office of the Attorney General. To purchase a handgun, one must additionally show proof of California residency and be at least 21 years old.

In May, Gov. Jerry Brown passed SB 140, a bill which allocated $24 million to seize illegal assault weapons held by convicts and people with serious mental illnesses.

California sheriffs hold the power to grant citizens permits for concealed carry of handguns or revolvers. However, they are often reserved for those who have a “good cause,” such as having a clear and present danger that can’t be resolved by other means of security, according to an article published in a California Rifle and Pistol Association newsletter.

Concealed carry without a license holds a mandatory minimum of 90 days in jail and may be prosecuted as a felony.

California’s laws are far more restrictive than those of Arizona, its neighbor to the east. Arizona doesn’t require a permit to purchase firearms, including handguns and assault weapons. Open carry is allowed everywhere, and if over 21 years old, concealed carry is permitted as well with no license needed.

Though California may have harsher gun penalties than most other states, Ballard said that though the law is perfectly capable of handing down punishments, it’s more of an after-the-fact scenario rather than one of prevention.

Currently, Utah and Colorado are the only states that permit concealed carry of weapons on some of their college campuses.