NFL teams who won’t bounce back from 0-3 starts 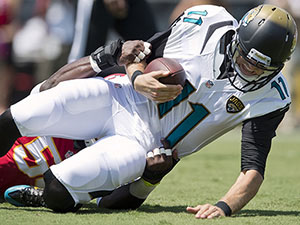 It is still September and the playoff aspirations for certain NFL teams with seemingly high expectations have already been derailed. With six teams sitting at 0-3 , here are three teams that have crashed and burned early in the season with little to no chance of reviving their putrid start.

New York Giants – Just two seasons ago, the Giants won the Super Bowl against the big, bad New England Patriots. This season, they look like a high school team trying to compete in the NFL. On Sunday, the G-men suffered a 38-0 loss to the Carolina Panthers who were 0-2 coming into the game.

In one of the biggest eyesores of the season, the Giants only mustered up a paltry 150 total yards of offense which was largely due to quarterback Eli Manning being on his back for most of the game as the Panthers racked up seven sacks and forced three turnovers.

The biggest problem with the Giants through the first three games is their lack of balance. Rookie runningback David Wilson has amassed a total of 75 yards total through three games. With no running game, opposing defenses can easily scheme and take away the passing game.

Look for the Giants to ride this nightmare deep into the season and miss the playoffs.

Tampa Bay Buccaneers – I had high hopes for the Buccaneers coming into this season. With second-year runningback Doug Martin coming off a 1,454 yard rookie campaign and offseason acquisitions such as star cornerback Darrelle Revis and hard-hitting safety Dashon Goldson, the Bucs looked poised to compete in their division.

Three games into the season, the problem doesn’t seem to lie with the players. It’s the coach. Head coach Greg Schiano has had a reputation of being a control freak, something that may work in college but has no place in the NFL. Schiano’s military style has turned off many players such as Revis, who publicly expressed that he was unhappy with Schiano’s style of coaching.

Quarterback Josh Freeman was a captain of the team for the last three seasons but this season, for a reason that is beyond me, Schiano stripped Freeman of his captaincy right before the season began. In the NFL, being receptive to your players is key and a motivated locker room translates into wins and they have been hard to come by for Schiano. He has a 7-12 overall record since he took over the Buccaneers and is 1-8 in the last nine games.

Schiano needs to go back to coaching at the college ranks if Tampa Bay wants to get back to winning games.

Jacksonville Jaguars – The Jaguars may possibly be the worst team in the history of the NFL. That may sound dramatic, but they have only tallied 28 points combined in three games and are ranked 30th in rush yards per game and 28th in pass yards per game.

Aside from their anemic offense, the Jaguars have the worst rushing defense in the league giving up an average of 168 yards per game on the ground.

In the first game of the season, the Jaguars suffered a lopsided 28-2 loss to the Kansas City Chiefs and on Sunday suffered an embarrassing, but expected, 45-17 beating at the hands of the Seattle Seahawks.

To add salt to the wound, quarterback Russell Wilson who torched Jacksonville for four touchdowns on Sunday, was passed up in the draft by the Jaguars for Bryan Anger, who happens to be a punter.

The Jaguars passing up on one of the best young quarterbacks in the league for arguably the least important position on a roster accurately sums up one of the most laughable organizations in all of sports.