Japan must apologize for sex crimes 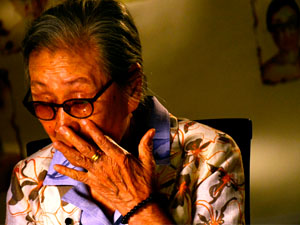 About the author: I am a member of the Korean American Forum of California, an organization dedicated to advocating for Comfort Women. After I wrote this piece, Sun-soon Choi, a Comfort Woman, passed away on Aug. 24 at the age of 87. She was kidnapped and drafted to a Comfort Station at the age of 16. Choi had been a good friend with deceased Yong-nyo Lee, and Choi’s health worsened with the shock of her old friend’s death. Choi’s family did not know of her past as a Comfort Woman until 10 months ago, when her Alzheimer’s began. She concealed her past to her family because she did “not want to embarrass them.” I pray that she is now free of all the suffering, and I stress again that the government of Japan must apologize to these victims rather than waiting for the world to forget.

The clear sound of a Chinese wooden temple block echoed among the tall buildings of downtown Los Angeles. A Buddhist monk walked slowly, hitting the block rhythmically, reciting scripture for the deceased. A man holding a picture of an old woman followed the monk. Behind him, four men holding a flower-decorated coffin marched as people with a banner and signs followed.

The banner read: “The Government of Japan Must Apologize to the Victims of Sexual Slavery. In Memory of Lee Yong-nyo (1926-2013).”

The group marched for two blocks and stopped in front of a tall building where the Consulate-General of Japan is located on the 17th floor. Participants laid the coffin and the picture on the sidewalk and read eulogies for the deceased Yong-nyo Lee.

Lee was one of the so-called Comfort Women, women who were forced into sexual servitude by the Japanese Imperial Army during World War II.

I was there. I also mourned for Lee. This poor woman lived her life with trauma from her days as a Comfort Woman, enduring the insulting comments made by Japanese officials such as Osaka Mayor Toru Hashimoto. All she asked for was a sincere apology, which she never received in her 87 years of life.

Similarly, what all the survivors are asking for is a formal apology by the prime minister of Japan and the compensation they should have received. I too ask for what these grandmas (a term of endearment for the Comfort Women) ask for.

During World War II, the Japanese government falsely drafted and kidnapped about 200,000 women from Asia and forced them into sexual slavery for Japanese soldiers. Most were Koreans, as Korea was under Japanese occupation at that time. The rest were from China, the Philippines, Burma, Thailand, Vietnam, Malaysia, Taiwan, Indonesia and other Japanese-occupied territories. Many girls were told that they would work for the army as factory girls or temporary nurses. Others were simply kidnapped.

Lee came from a poor family and worked since she was 8 years old. She was sent to a brothel referred to as a “Comfort Station” at the age of 16. Her employer told her that she could get a job in Japan which promised a lot of money and plenty of food. Lee left Korea full of hope, dressed in the modern white clothes and shoes the employer gave her. Her dad walked Lee to the port, which turned out to be the last place the father and daughter saw each other.

At the Comfort Station girls were forced to serve 30 to 50 men a day. Shin-kwon Ahn, the executive director of the House of Sharing, a home for surviving Comfort Women in South Korea, said the average age of those girls when they were taken was 12 to 14, and most were virgins. Comfort Stations were spread all over Asia where the army was present.

The main purpose of the Comfort Women system was to keep the soldiers free of sexually transmitted diseases from local prostitutes and to prevent soldiers from raping local women. Reuters reported on 91-year-old former Japanese soldier Masayoshi Matsumoto who witnessed first-hand the Comfort Women as a medic during WWII.

After the war, many women were killed in order to cover up what the Japanese army was doing. Many survivors did not go back home because of the humiliation. Some went back but lived in silence, suffering from shame and post-traumatic stress disorder. Many of the survivors could not marry nor have a child because their bodies were ruined.

As the U.S. House of Representatives passed the House Resolution 121, the Comfort Women resolution in 2007, the movement for comfort women advocacy grew more active. The resolution, introduced by Japanese-American Rep. Mike Honda, demanded a formal apology to the victims from the government of Japan. It also called on the Japanese government to include Comfort Women history in their history curriculum. A few Comfort Women monuments were erected in local governments on the east coast, such as in Palisades Park, New Jersey.

The first monument on the West Coast was unveiled earlier this year in July. The city of Glendale has dedicated a portion of Central Park to the memorial. Many Japanese-Americans sent angry emails to the City Council in protest to the monument. Japanese Consul General Jun Niimi wrote a letter to the Los Angeles Times that the government of Japan has already made an apology and compensations to the victims.

But many Comfort Women activists believe more has to be done. About 500 people gathered for the unveiling ceremony.

When the city of Buena Park decided to discuss the idea of having a Comfort Women monument in their city as well, the Japanese government acted fast. Buena Park Councilman Miller Oh said the Japanese Consul General Jun Niimi has sent letters to the council and visited the members in order to stop the plan.

Comfort Women survivor Hak-soon Kim first broke her silence 22 years ago. After this, 234 survivors in Korea reported that they were Comfort Women and began the long fight to receive the formal apology from Japanese prime minister. Since Yong-nyo Lee passed away, only 57 are left.

In 1994, Japanese Prime Minister Kono Yohei admitted the use of comfort women during WWII, calling it a crime. However, Japan’s current Shinz? Abe administration is questioning the statement. Prominent Japanese politicians like Osaka Mayor Toru Hashimoto are also making insensitive comments about the issue. The Wall Street Journal has reported that Hashimoto said that the practice of keeping Comfort Women was a “necessary system to maintain military discipline.”

Consul General Niimi’s attempted direct lobbying of Buena Park not only reflects Japan’s official position, but it is also goes against foreign protocol. He is intervening with a U.S. local administration instead of officially talking to the U.S. government. Niimi is also insulting the Comfort Women by spreading incorrect information.

“Japan has provided atonement money to former Comfort Women and implemented medical and welfare support projects,” he wrote to the LA Times, which survivor Bok-dong Kim said “is a total lie.”

The Japanese government is also omitting Comfort Women from their history curriculum, teaching incorrect and incomplete history about Japan’s role during the war. It’s an insult to all Comfort Women, alive or not.

They are dying. As little time as the victims have, the government of Japan also does not have much time to apologize and recover from its dishonorable war crimes.