Student-athletes give back to the community 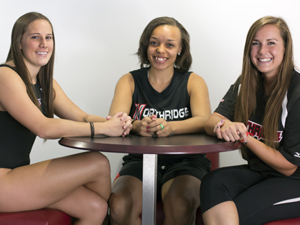 The children were overcome with joy and had smiles on their faces as they had been looking forward to Friday all week. As CSUN student-athletes from the women’s water polo team and basketball team entered Mark Ellis’ third grade class at Granada Elementary Community Charter School, the kids were squirming in their seats eager to meet them.

The athletes took turns introducing themselves to the class and explained what position they played on their respective team. It was then the students’ turn for each to choose a student-athlete to spend the next 30 minutes reading books they had picked out in anticipation of Friday.

For the past four years, Mr. Ellis and CSUN’s Student Athlete Advisory Committee, or SAAC, have coordinated weekly reading sessions that seem to bring as much joy to the SAAC members as it does to Ellis’ students.

SAAC is an organization comprised of CSUN student-athletes who focus on helping out the local community by hosting a number of events throughout the year.

“They love them. You can see it in there. They’re so excited,” Ellis said. “They’ve been waiting all week. They thought it was yesterday, and so today they were excited.”

Ellis’ students were genuinely ecstatic to pick an athlete to read with as they couldn’t restrain from constantly shouting over each other and blurting out whatever’s on their mind.

“Pick a hottie!” said one girl to a boy as he was deciding who to pick.

Designed as a fun reading activity for the kids, the weekly visits have evolved into something more.

The relationship between Mr. Ellis’ students and the student-athletes has grown into a mutual and unconditional support for one another. Ellis, his students, and their parents have made an effort to attend as many games as they can over the past few years, making signs to show their support.

The connection made between the two groups of students has led to quite the relationship.

A bond grows between the children and the athletes as they get to know each other throughout the year.

“They really do become attached and the kids want to read with their favorite person that they read with the last time, and to be honest, I think the athletes get as much out of it as the kids at least, if not more. No one is forcing them to come, yet they show up,” Ellis said.

After they had finished reading, Mr. Ellis’ class had some time to spare before lunch so they played some basketball and kickball together with the student athletes.

“I love kids. I love seeing the smiles on their faces, and it’s always good to see someone at such a young age appreciate what you do,” White said. “They really look at us like superheroes and superstars, it’s refreshing. It brings us back down to reality.”

SAAC has grown steadily over the past few years as the number of members continues to rise and an ever developing professionalism keeps the program on track to expansion.

“It’s hard to start a tradition. We have to start from the bottom and get the freshman used to it so when they’re seniors they will have a good time and be active members,” said Chloe McDaniel, senior soccer player. “It’s getting there but we just need to get more people on board.”

Aside from helping out the local community, SAAC is also focused on the student-athlete community within CSUN and emphasizes on bringing all the student-athletes together as they all share a common lifestyle, can easily relate to one another, and serve as a support group for each other.

“I didn’t know many athletes before I joined SAAC. I’ve met a lot of cool people who are really supportive and are fun, like our teammates,” White said. “They treat us like family and it’s really cool to be around.”

Every year during Christmas, SAAC participates in the adopt-a-family program, in which they pick one needy family to help during the holidays and each SAAC member donates some money with which they buy gifts and necessities. Every spring, SAAC also works with children with disabilities during the Matador games and the Matador bowl.

“SAAC makes me a better person. I feel like an all-around better person by doing things for the community. It makes me humble for my family and upbringing and [I] realize that I can’t take my life for granted as we help those who are less fortunate,” said Brianna Elder, junior softball player and secretary for SAAC.

SAAC looks to further expand their community impact by elevating awareness and hopes to increase it’s impact on and off campus.