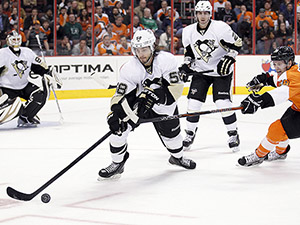 Following a surprising exit during last year’s Stanley Cup playoffs, the Pittsburgh Penguins are reloaded and primed to hoist Lord Stanley’s Cup yet again. If the Pens want to return to the finals, they’ll have to exorcise their demons and face the Boston Bruins in the Eastern Conference Finals for a second year in a row.

Here’s a look at the 2013 Eastern Conference and which teams look ready to make a practical run at a championship.

Metropolitan Division – The Pittsburgh Penguins are the clear favorites coming out of the Metropolitan Division led by All-Stars Sidney Crosby and Evgeni Malkin. Despite last year’s epic meltdown in the Eastern Conference Finals, the Pens’ prolific offense is more than capable of making a deep playoff run this year. In 2012 Crosby finished fourth in points (56) and second in assists (41) while Malkin led the team in points (16) during the playoffs. The re-signing of head coach Dan Bylsma and goaltender Marc-Andre Fleury should give Pens fans realistic Stanley Cup aspirations.

Pittsburgh’s new divisional rival (thanks to this year’s divisional realignment) is the New York Rangers. With arguably the best goaltender in Henrik Lundqvist and newly appointed head coach Alain Vigneault, the Rangers look poised to finally contend for a Stanley Cup. All eyes will be on Rick Nash and Brad Richards who combined for a measly two goals during last year’s playoffs.

Despite narrowly missing the playoffs in 2012, the Columbus Blue Jackets’ valiant push towards the postseason (in which they won nine of their last 12 games) showed that they have potential moving forward. With returning Vezina Trophy winner Sergei Bobrovsky and the acquisition of winger Nathan Horton, the Columbus Blue Jackets have a legitimate shot at playoff contention.

The Washington Capitals round out the only other relevant team in this division. Winning both the Maurice Richard Trophy and the Hart Memorial Trophy in the same year, Alexander Ovechkin looks like the vintage, highlight machine the hockey world is accustomed to. Ovechkin will put the Caps on his back again and take them on a lengthy postseason run.

The Penguins will win the Metropolitan Division followed by the Rangers in second, the Blue Jackets in third and the Capitals in fourth.

Atlantic Division – Coming off a last-minute defensive collapse in game six of the 2012 Stanley Cup Finals, the Boston Bruins will look to rebound in 2013. The sudden departure of goaltender Tim Thomas had Bruins fans apprehensive at the start of 2012 until Tuukka Rask stepped into the crease. Rask posted an outstanding 1.88 goals against average and 94 percent save percentage in last year’s playoffs. Don’t expect a Stanley Cup hangover for Boston.

The Western Conference perennial powerhouse that is the Detroit Red Wings will be taking their talents to the Eastern Conference this year. The Wings have one of the most talented playmaking, ankle-breaking, players in Pavel Datsyuk, who led them in points (49) and goals (15) in 2012. With the emergence of goaltender Jimmy Howard, Detroit is ready to continue its streak of 23 straight playoff appearances and possibly another Stanley Cup title.

Adding winger Bobby Ryan from the Anaheim Ducks will bode well for the Ottawa Senators in 2013. Ryan was considered one of Anaheim’s top forwards and will be heavily relied upon to fill the offensive void of Daniel Alfredsson. The Senators should be a formidable force in the East, especially with goaltender Craig Anderson and defensive superstar Eric Karlsson returning.

Although the Montreal Canadiens don’t have much size, they do have lots of speed. If the Canadiens want to return to the playoffs in 2013, they’ll have to reproduce their offensive output of 3.04 goals-per-game. Habs fans are optimistic their team can finally break Canada’s 20-year Stanley Cup dry spell, and bring the cup back to Montreal.

The Bruins will win the Atlantic Division followed by the Red Wings in second, the Senators in third and the Canadiens in fourth.