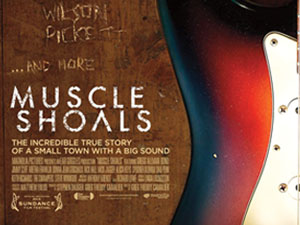 In Northwest Alabama along the Tennessee River, with a population of less than 13,000, lies the town of Muscle Shoals. Little did residents know that this small town would forever shape popular music.

Founded in the late 1950s by Rick Hall, Fame Studios birthed what would be known as the “Muscle Shoals Sound.” The sound quickly spread around the world and artists would travel from all over to this special town. As Bono, from the music mega group U2, said of the town, “There was just something in the mud.” American soul singer Clarence Carter said that “each time a person went to Muscle Shoals, they came out with a hit.”

Aretha Franklin, Wilson Pickett, The Rolling Stones, Bobby Womack, Otis Redding, Etta James and countless others recorded many hits at Fame Studios due to an energy they felt was unlike anywhere else. For groups like Lynyrd Skynyrd and The Allman Brothers Band, Muscle Shoals became the birthplace for “Southern Rock.”

The Los Angeles Chapter of the Recording Academy hosted a screening of the new documentary “Muscle Shoals” along with a short Q&A on Sept. 16. The film explores not only some of the most resonant songs of all time, but also gives viewers an inside look into the life of Fame Studio founder, Rick Hall. Hall faced many tragedies documented throughout the film but always bounced back from them to continue the legacy of the “Muscle Shoals Sound.”

The film featured commentary along with performance footage and photos from legendary artists Steve Winwood, Etta James, Bono, Mick Jagger, Clarence Carter, Greg Allman, Aretha Franklin, Jimmy Cliff, Keith Richards, Percy Sledge, Candi Staton and Alicia Keys among others. Director Greg “Freddy” Camalier said Rick Hall helped contribute some of the older photos and performance footage. Camalier also spoke about this being his first documentary and discovering all of the amazing stories about this town throughout the filming process. He went on to say that he is incredibly proud to have spent these last four years bringing this incredible American tale to the silver screen.

“Muscle Shoals” will be available On Demand, on iTunes and in theaters on Friday. The soundtrack featuring Aretha Franklin, Alicia Keys, Percy Sledge, Paul Simon and more was released physically and digitally on Tuesday.