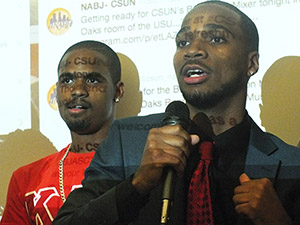 The event, hosted by the National Association of Black Journalists (NABJ), provided pizza, refreshments and performances to entertained guests in the Thousand Oak room.

“I was told today about the event by a friend and wanted to come and learn about the organizations on campus,” says Lexis Lambert, sophomore business major. “I wish they would have done more advertising because there are a lot of people on campus that are interested in getting involved but don’t know where to get information.”

The two hour event attracted nearly 80 students. The crowded room was filled with energy and engaging conversations. All interested students were greeted by members of the various organizations and were informed of upcoming events. Participants carried five to six flyers from different organizations in their hands as they made their rounds.

“Everybody (was) welcomed to come. All organizations cater to the Black community, but we don’t discriminate,” says the President of NABJ Janae Franklin. “The event allows all students to see the opportunities for involvement and leadership.”

Members of the Alpha Nu Kappa sorority expressed their wish to acquire more members to join their organization. The is open to women of every ethnicity such as African-American, Latino, Asian and more.

“We put academic’s first,” said Kalkidan Temesgen, member of Alpha Nu Kappa Sorority. “We want to invite the women of CSUN to learn about our group and what’s available to them.”

The event surprised its guests with a short performance from CSUN’s Gospel Choir. Acting as an intersession, CSUN’s first Christian dance team, Committed Feet, was one of the highest anticipated moments of the evening. The group received much praise from the crowd after performing to Tedashii’s three-minute song “Riot.”

“You don’t have to be Christian. We want anybody who knows how to live and live through movement,” said the Founder of Committed Feet, Diontay Odom. “Our part, as leaders, is to impart love and encouragement.”