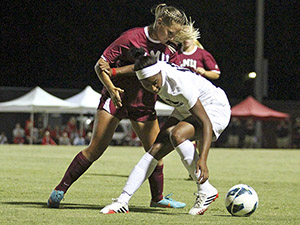 “That was the best soccer we’ve played all year,” West said. “We were excellent the first 10 minutes of the game.”

After a lackluster game last Sunday versus the University of San Diego, the Matadors jumped on the Lions early scoring in the first four minutes of the game.

Junior forward Brittanie Sakajian credits the start of the game to the motivation the players got from themselves rather than the coaches prior to the game.

“I feel like a lot of the motivation was from them (the coaches), but from the start of warm-ups, that’s where our motivation came from,” Sakajian said. “We’re the ones who have to bring it to the games, so I think it ends with us and starts with us.”

The Matadors full-field pressure killed any rhythm LMU was trying to build.

In the fourth minute, CSUN took advantage of a poor goal kick and immediately turned to attack. It was Sakajian who made the Lions pay for their inability to clear the ball out of the box as she put the ball past the keeper and just under the crossbar from the top of the box.

The pressure the Matadors were sustaining in the opening part of the game lightened up halfway through the first half and carried into the second half. It was then, when the Lions turned the tables on the Matadors and tied the match at one.

LMU’s midfielder Jocelyn Blankenship capitalized on a CSUN turnover and shot a beautiful ball from 25 yards into the top left corner for the equalizer.

West felt like his team showed signs of complacency leading to LMU’s goal.

“I don’t think we played with the same intensity and the same vigor we had in the first half,” West said. “This is what we got to teach. We got to learn that we have to bring it every minute for 90 minutes.”

“It feels amazing,” Preston said about her first goal. “Honestly, when it happened, I turned back to my team to make sure it happened.”

Preston attributes the team’s speed as the reason they were able to exploit the LMU defense.

LMU did not throw in the towel after Preston’s go ahead goal. Instead, the Lions had two more opportunities to tie the game.

The first chance was off a Matador turnover forcing senior defender Chloe McDaniel to come up clutch on a one-on-one attack against the offensive player. The second chance came with five minutes remaining, when sophomore goalkeeper Cynthia Tafoya made a save by skying high for the ball.

The Matadors finished non-league play tonight by winning five out of the last seven games.

Like West, Preston and Sakajian are excited to get league play underway.

“I’m ready for it,” Preston said. “I’m excited. I want to relive last year, and win it all again.”