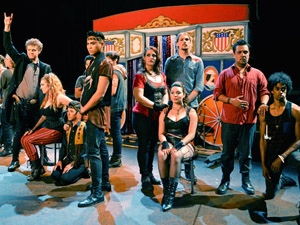 Learning about a United States president has never been more entertaining.

CSUN’s production of “Bloody Bloody Andrew Jackson,” written by Alex Timbers and directed by Garry Lennon, with music and lyrics by Michael Friedman, is an inappropriately catchy rock musical based on the life of Andrew Jackson, seventh president of the United States.

Jackson, played by Jared Tkocz, begins his journey at the age of 13 following a tragedy that shapes his character throughout the musical. After a couple of catchy songs, he gets captured by the British, marries a woman named Rachel — played by Brooke Van Grinsven — and becomes the governor of Florida while simultaneously announcing his candidacy for president.

After a conspiracy robs Jackson of the election, he runs again — much to his wife’s disdain — and wins.

Shortly after, his life is rocked by another death and a betrayal. Nonetheless, Jackson is able to start the Democratic Party, but soon experiences the beginning of his downfall.

The musical is laced with foul language, sexual humor and catchy, upbeat songs that are certain to make heads bob to the beat. Plenty of f-bombs are launched and the characters have an affinity for suggestive lines, especially Jackson with lines like, “I’ll show you my stimulus package.”

The music is performed by a live band, which is the most enjoyable part of the show apart from the actors’ performances and singing chops.

Tkocz plays Jackson’s murderous nation-conquering perfectly, constantly bad mouthing and poking fun at the nations he despises. His singing, while not always spot on, exemplifies the moment he is in during a scene, such as in “I’m Not That Guy” and “Public Life.”

Van Grinsven plays opposite Tkocz well, and is the most talented singer of the cast. When paired with Tkocz on their humorous but touching duet “Illness as Metaphor,” her voice blends well with his, making for a pleasing harmony.

The eccentric and somewhat homoerotic Martin Van Buren, Jackson’s vice president, is played by Zachary Yowarski. Yowarski is often in charge of comic relief, a task he has no problem in completing.

Tkocz successfully portrays the complex nature of Jackson’s character from start to finish. Jackson’s unapologetic relocation of Indian tribes, disdain for the British and the Spanish, and his childish demeanor are countered by the tragic losses he endures. In a scene in which he sends an orphan baby to Rachel as an apology for his continued absence, he reveals himself as somewhat of a sympathetic character.

Adding to the musical’s appeal is a character named The Storyteller, played by Danielle Samson. She provides the audience explanations of what is to come in between scenes. She gives funny lines throughout the play and is the most enjoyable secondary character other than Van Buren.

The musical is two hours long with no intermission, so be sure to use the restroom before taking a seat.

For lovers of musicals, rock songs, vocal harmonies, American history and little raunchiness, “Bloody Bloody Andrew Jackson” is the ticket to get.

Tickets are available by contacting the CSUN ticket office at (818) 677-2488. Student admission is $15, faculty and staff admission $16 and general admission is $20. Visit CSUN’s department of theatre website for more information.