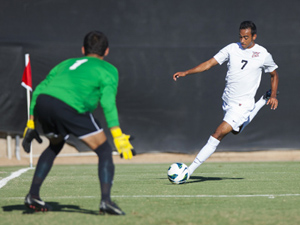 The Matadors (8-1-0) bounced back from their first loss of the season, defeating Bradley University (4-3-1) 1-0 in the dying seconds of regulation Saturday at Shea Stadium in Peoria, Ill.

Just as both teams were preparing for overtime, junior defender Tanner Snedigar broke the stalemate in the 89th minute of play, thanks to a timely, well placed header.

With the win, CSUN has defeated eight non-conference opponents for the first time in the program’s division I history.

The opening minutes of the first half saw both teams exchange quality scoring opportunities, but neither could capitalize and come away with a goal.

Northridge got their best chance of the half off a corner kick that found the head of junior forward Sagi Lev-Ari but was blocked by the Braves’ defense.

Sophomore goalkeeper Adam Hobbs was forced to make a critical diving save in the ninth minute to keep the match scoreless.

In the 31st minute, senior midfielder Chris Smith sent a quality shot on net that was parried by Bradley goalkeeper Brian Billings.

Despite being outshot 9-10, CSUN held the advantage in shots on goal (4-1) forcing Billings to come up with four saves in the first half.

The Matadors led the Braves in corner kicks 6-4 and in fouls 8-6 at the half.

At the start of the second, both teams were whistled for coincidental fouls.

Junior midfielder Yarden Azulay had a decent bid for Northridge in the 48th minute but came away empty handed thanks to a save by Billings.

Bradley’s best chance of the game came in the 67th minute of play. Braves midfielder Tyler Davis sent a thundering shot from outside the box that was deflected to Grant Bell near the right side.

Bell was all alone inside the box with Hobbs but failed to chip the ball past the Matador goalkeeper.

Neither team looked like they could keep control of the ball as possession switched back and forth.

CSUN’s leading scorer Lev-Ari received the only yellow card of the game in the 76th minute.

Just as both teams were preparing for an additional period, Azulay sprang senior forward Beto Velasquez down the right flank.

Velasquez then sent a left-footed cross to a wide-open Snedigar near post for the easy tap in header, giving Snedigar his first goal of the season with just a minute left in regulation.

Bradley had one final crack at tying the game, but their corner was easily handled by Hobbs and the Matador defense.

The Braves finished the game outshooting the Matadors 20-15, recording more shots than CSUN in both halves of play.

Hobbs had to make four excellent saves in the game, including three in the second half to preserve the 1-0 shutout. Billings ended the game with five saves.

The Matadors will begin their Big West Conference play on the road next weekend against Sacramento State and UC Davis.

If Northridge wants to repeat as Big West Conference Champions they’ll have to do it against two formidable opponents in Sacramento State and UC Davis.

Kickoff against Sacramento State is scheduled for 4 p.m. on Friday.