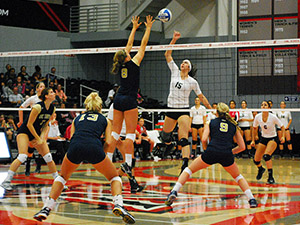 After watching their four-point lead dwindle to one late in the set, sophomore middle blocker Cieana Stinson tapped one kill and spiked another, putting the Matadors just one point away from winning the match.

On the next play, junior opposite hitter Natalie Allen blocked a scoring attempt by junior outside hitter Valerie Brain, sealing the set and the victory for the Matadors.

“After that timeout, we knew we had to pull ahead,” Allen said. “Once we get on a roll, we stay on a roll. We just feed off each other’s energy and that’s how it went.”

The Matadors got off to a slow start, losing the first set 25-19 and committing six errors. The second set was contentious and had 19 ties and 7 lead changes. CSUN would score the last two points to win the set, 26-24.

Late in the third set, CSUN had an 18-14 lead, but a 6-2 push by the Aggies tied the score at 20. Senior opposite hitter Devon Damelio scored three of the next four total points, and the Matadors could never recover, losing the set 25-23.

With the match in jeopardy, the Matadors dominated the fourth set and recorded their highest kill and sideout percentages. They held UC Davis to a paltry hit percentage (16) and won the set easily, 25-18.

The Aggies responded with two back-to-back points by junior middle blocker Katie Quinn and a service ace by sophomore outside hitter Kaylin Squyers, pulling UC Davis within one and forcing a CSUN timeout.

Matador head coach Jeff Stork huddled his team together and tried to motivate them to come up with a win.

“[I told them to] stay in the moment, get one sideout,” Stork said.

The Matadors would score the next three points, winning the set 15-11 and the match, three sets to two.

Haina felt that CSUN’s win came as a result of Stork always telling the team to “fall back on their training.”

“We made sure we kept the ball in, executed our plays, dug, covered,” Haina said. “That really helped, so that’s why we pulled out those last two sets. We really stayed disciplined in what our training was.”

Stinson led the way with a game-high 19 kills, with 15 by both junior middle blocker Casey Hinger and senior outside hitter Mahina Haina, who recorded her 1,000th kill as a Matador early in the match. Two other Matadors had 10 kills each, and Allen led the way defensively with 13 digs.

CSUN’s next game is on the road at UC Riverside on Oct. 4.