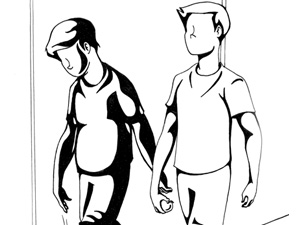 If you need professional counseling, contact University Counseling Services which provides online assessments, personal counseling, group counseling, outreach and consultation to all CSUN students. To make an appointment, call (818) 677-2366 between the hours of 8 .a.m and 5 p.m. Monday through Friday.

I am currently 21 years old, and have the power of youth on my side. All it takes is a quick gander in the mirror and it quickly becomes evident that I have strong physical characteristics. Dare I say, tall, dark and handsome; as charismatic as Jay Gatsby himself, yet even more affable. I am known as the elite extrovert amongst my friends, able to get along in most crowds.

You may be thinking that I have too much vanity and egotism for my own good; however, I challenge your presumptions – I simply listed those attributes to illustrate my point, which is this: despite what I may exude on the exterior, on the inside I am as broken as it gets. In addition to the immense void I feel within – which mind you, has led to an unbearable major depressive disorder – I have had an eating disorder since I was four years old.

Perhaps that does not sound as severe as it really is, but allow me to enlighten you on just how treacherous eating disorders are.

Unless you have had personal experience with an eating disorder, or have known somebody who has, it is rather difficult to comprehend just how painful the struggle is.

A mere three weeks ago I attempted to take my own life due to the continual dread that precedes a meal, and was fed up with the constant suffering; I realize that regardless of the suffering, nothing warrants suicide, yet on that particular night of the attempt it seemed like the most plausible option.

You see, to an outsider it may seem trivial or cowardly, but the malnourishment one deals with when facing anorexia is outright inhumane. I have yet to experience any worse feeling than having that deep, painful sensation of starvation, yet still not being able to consume food due to the self-inflicted mental malice that follows a meal.

Many people – perhaps even you – have posed the question, “Why don’t you just EAT? Don’t you realize that you have to nourish yourself in order to survive?”

Trust me on this one, often I’ve confronted myself with similar questions. I wish it were that easy, but reality proves it is not.

So, you may ask, where do we go from here? Well, just like every other disorder, unfortunately there is no perfect answer; however, I can provide insight from my personal odyssey, in an effort to provide some hope and clarity.

Interestingly enough, those of us who struggle with eating disorders are not so much plagued by food itself, but rather we are constantly combating underlying issues, which in turn manifests the eating disorder. Through my experience, I’ve learned that in order to overcome this horrid disease, one must diligently work on unraveling pressing issues that are bottled up deep within.

Having spent four months in rehab, I understand that retracing our steps can lead to re-surfacing an array of past traumas; however, it is well worth the effort. Reflecting on my life, I was afforded the opportunity to get to know myself on a much more intimate level, bringing awareness to the traumatic experiences I had as a young child. Growing up in a broken household, there was never really anybody to turn to when I was suffering from depression; consequently, I dealt with my frustration through food. With physical, sexual and emotional abuse present in the majority of my childhood, it is no surprise that an eating disorder was birthed – I had to find some way to cope with all of the anguish I was experiencing.

The danger with managing anxiety through binging, restricting and purging, is that it is not only a hazard to one’s health, but it can potentially be fatal. Through my recovery process I have come across individuals who have been on the verge of death; many of whom were admitted to hospitals, having had to be fed through tubes, their bodies no longer able to process and digest solid food.

Putting the fatality of an eating disorder aside, even if it does not take your life, it certainly robs you of all the pleasures that come with food. Imagine not being able to eat out with friends because of the shame that comes along with an eating disorder or, as an aspiring student, not being able to focus on your academics because of the malnourishment your brain is suffering from.

Oscar Wilde once said, “The rarest thing in the world is to LIVE; most people exist, that is all.” In my opinion, Mr. Wilde could not have been more accurate with his claim, especially when it comes to the eating disorder population; just getting through the day is a feat in itself. Surviving becomes the goal and all else is lost – now, if you ask me, this is a terrible tragedy that must be remedied.

According to an article posted in the Huffington Post, the number of young men dealing with eating disorders has increased by a daunting 27 percent since 2000; yet, due to the lack of education and shame that comes with opening up, many have not sought out the help that is available. It is our responsibility as a society to educate one another and encourage the resources that are at our disposal, given that there are certainly innumerable resources on campus and in our community.

Thankfully, with the help and guidance of the University Counseling Services, which provides free services for students, I have been able to get the support I need in order to remain healthy. Don’t get me wrong, each day is still a struggle, but I have accumulated the skills I need to persevere. Perhaps this is a demon I will battle for the remainder of my life, but I refuse to allow it to take my life.

Cultural, societal or personal dogmas may label men with eating disorders as weak, but on the contrary, it takes one helluva courageous person to have the audacity to reach out and admit they cannot do this alone. Unfortunately, given the societal expectations men are inundated with, opening up about such a pressing issue may have consequences that follow. Personally, my disorder has been interpreted as a weakness. With three hospital stays under my belt, four months in rehab, and somebody who takes antidepressants, I’ve failed as a male, according to society’s standards. We’re expected to be emotionless, never allowing anything to interfere with our roles as masculine leaders.

Although many of us have closeted our struggle with disordered eating, I believe it is in our best interest to reach out and seek the help we need. It took me 17 years – part of my life which I will never get back – to finally confide in somebody about my eating disorder, and what I realized through my journey is that nobody deserves to fight this battle alone; there is help out there, we just have to take a leap of faith and give it a chance.